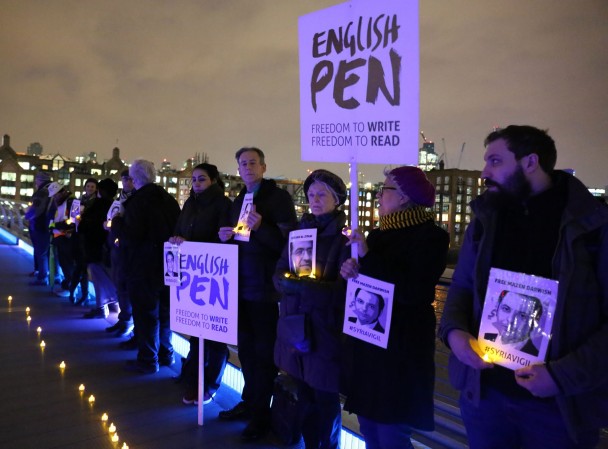 Sixteen international organisations have joined the Syrian Centre for Media and Freedom of Expression (SCM) in welcoming the release of its president Mazen Darwish and in calling for all charges against him and his colleagues to be dropped, as well as for the release of all other prisoners of conscience who remain detained by the Syrian authorities.

Whilst welcoming this week’s release of Mazen Darwish and of his SCM colleagues Hani Al-Zitani and Hussein Gharir last month we are extremely concerned that they continue to face charges of ‘publicising terrorist acts’ and are due to face trial later this month. We continue to call for all charges against them to be dropped immediately and unconditionally, and for an end to the persecution and judicial harassment of the three men for their legitimate human rights work. The authorities in Syria must further guarantee that all human rights defenders are able to carry out their legitimate human rights activities without fear of reprisals and free of all restrictions.

The organisations also continue to protest the arbitrary detention of many other peaceful activists and others held by the authorities as a result of the legitimate exercise of their human rights, such as the cases currently documented through the Free Syria’s Silenced Voices campaign.

Activists have also been targeted by non-state armed groups. Among others, Razan Zaitouna and her colleagues Samira Al-Khalil, Nazem Hamadi and Wa’el Hamada from the Violations Documentation Centre in Syria remain missing following their abduction on 9 December 2013.

The Syrian authorities must comply with their obligations under international law, including international human rights and humanitarian law, and release all persons detained solely for the peaceful exercise of their rights to freedom of expression, freedom of assembly and association or solely for treating the sick and wounded or providing humanitarian assistance. Non-state armed groups, including the Army of Islam and other armed groups operating in Douma and elsewhere in the country, must stop their practice of abducting human rights defenders and release those detained.

Syrian Center for Media and Freedom of Expression (SCM)