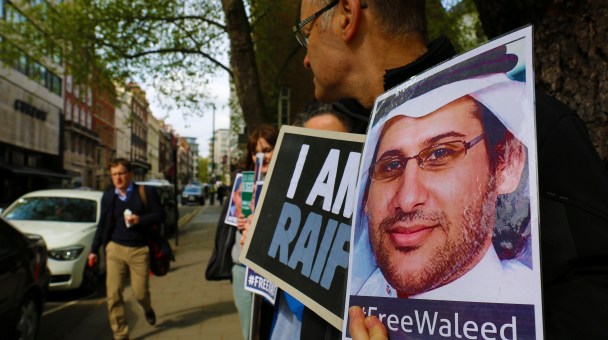 This month marks six years blogger Raif Badawi organised a conference to mark ‘a day of liberalism’ in his native Saudi Arabia. The conference, which was to have taken place in Jeddah on 7 May 2012, was banned by the authorities. Raif was arrested shortly afterwards, on 17 June 2012. Two years later, on 7 May 2014, he was sentenced to ten years in prison and 1,000 lashes. Four years on, he remains in prison with the threat of further lashings looming large.

Join our upcoming vigils on Friday 18 May (9-10am) and Monday 18 June (1-2pm) to continue calls for Raif Badawi’s immediate and unconditional release.

We will also be continuing our calls for the release of award-winning human rights defender Waleed Abulkhair – also Raif’s lawyer – who is serving 15 years in prison for ‘undermining the regime and officials’, ‘inflaming public opinion’, and ‘distorting the kingdom’s reputation’ and of Palestinian poet and artist Ashraf Fayadh, currently serving eight years in prison in Saudi Arabia and facing the threat of 800 lashes.

Activists are asked to meet at the Curzon Street entrance to the Embassy. (note: the postal address of the Embassy is 30-32 Charles Street, Mayfair, London).