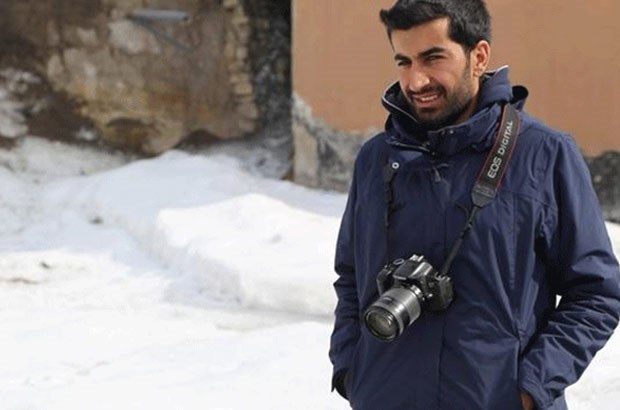 Read translations of his poetry by PEN Centres and PEN supporters

‘Dear PEN Members, we would like to express our eternal gratitude for every act of solidarity that you have carried out so far or you plan to in the future. While some people try to stifle our pens with a pile of grave earth, we will continue to hold them and produce. We would like to remind you that when the taste of solidarity is still within the reach of our hands, we will continue to write our reports, stories, novels and poems, line by line, letter by letter.’

News editor, reporter and poet Nedim Türfent is serving an eight years and nine months prison sentence on trumped-up terrorism charges following an unfair trial, during which scores of witnesses said they had been tortured into testifying against him. Prior to his arrest, Nedim Türfent was covering Turkish military operations in southeast Turkey. He spent almost two years in solidarity confinement in harrowing detention conditions. His sentence was upheld on 19 June 2018 and his appeal is pending before Turkey’s Constitutional Court. PEN International believes that Nedim Türfent is being imprisoned solely for the peaceful exercise of his right to freedom of expression and calls for his immediate and unconditional release.

Nedim Türfent started composing poetry while detained. To celebrate World Poetry Day, we encourage PEN Centres to translate the following poem (“Let my heart five life”) into their own language. We will then collate all translations and send him an anthology.

Send copies to the Embassy of Turkey in your own country. Embassy addresses may be found here: https://embassy.goabroad.com/embassies-of/turkey.

Please reach out to your Ministry of Foreign Affairs and diplomatic representatives in Turkey, calling on them to raise Nedim Türfent’s case in bilateral fora.

In February 2019, over 650 writers, journalists, publishers, artists and activists signed an appeal calling for Nedim Türfent’s immediate and unconditional release. The appeal is now open for public signature. Add your name here.

In a letter written on 25 December 2018, Nedim Türfent thanks PEN members for their solidarity campaign and reiterated his determination to keep writing:

‘The invaluable solidarity campaign you have initiated has honoured us all, making our forehead reach the stars, and negating the meaning of the idiom ‘out of sight, out of heart’. Such meaningful campaigns will enable us to surpass the curtains that block the word, overcome the shadows cast over the charm of life and enable us to overcome together the cold locks that restrict our pens. We will not kneel, and we will leave a drop of our verses on every page of life.’

Please keep sending solidarity messages of solidarity in English, German, Turkish or Kurdish, as well as books and magazines to:

A news editor and reporter at the pro-Kurdish Dicle News Agency (DİHA), Nedim Türfent was arrested on 12 May 2016 after covering clashes between the Turkish army and the armed Kurdistan Workers’ Party (PKK) in the predominantly Kurdish southeast of Turkey. He had notably received the prestigious Musa Anter journalism award for a story covering a military operation in the Kurdish city of Yüksekova, where a group of soldiers reportedly handcuffed and pinned 50 villagers face down, yelling slurs such as ‘you will witness the power of the Turk’.

Nedim Türfent spent nearly two years in solidarity confinement, during which time he was transferred to several prisons. In a letter addressed to Turkish columnists and dated 8 May 2017, he reported harrowing detention conditions in his four-meter-long prison cell, where he was denied access to TV, radio, books or newspapers and forced to read ‘the back of detergent boxes’ to pass time. According to the UN Standard Minimum Rules for the Treatment of Prisoners, prolonged solitary confinement amounts to torture or other cruel, inhuman or degrading treatment or punishment and must not be imposed under any circumstances.

Nedim Türfent was formally charged with ‘membership of a terrorist organisation’ and ‘spreading terrorist propaganda’ 10 months after his arrest. Among the reasons listed in his indictment were his social media posts, his news reporting and 20 concealed witness testimonies. His first hearing was held in Hakkari on 14 June 2017, some 200km away from Van where he was being detained. He was denied the right to appear physically in court seven times, and instead testified via the judicial conferencing system SEGBİS, experiencing severe connection and interpretation issues. Out of the 20 witnesses called, 19 retracted their statements, saying they had been extracted under torture. Despite such clear evidence of flagrant fair trial violations, Nedim Türfent was sentenced to eight years and nine months in prison for ‘membership of a terrorist organisation’ and ‘spreading terrorist propaganda’ on 15 December 2017.

On 19 June 2018, the Erzurum Regional Appeals Court upheld Nedim Türfent’s conviction. His lawyers lodged an appeal before Turkey’s Constitutional Court on 3 September 2018. While waiting for a ruling on his case, Nedim Türfent spends his time studying Turkish, English and German and writing poetry.