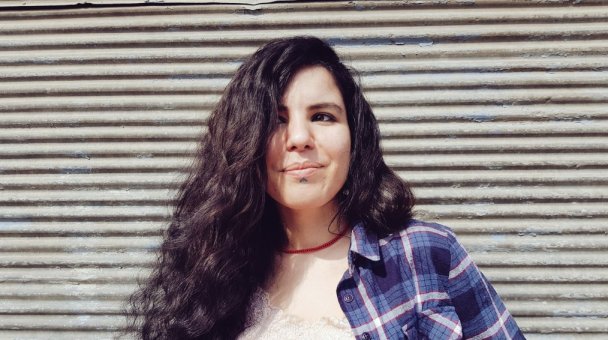 The painting will be exhibited in the Safehouses gallery and sold to raise funds for Campaign Against Arms Trade (CAAT) and English PEN. Sessizlik is an acrylic and oil painting on canvas, capturing the suppression of voices caused by war and weapons.

The auction of Zehra’s work and pieces by fellow contributors will take place at 7pm on Friday 13 September. Find out more here.

Zehra Doğan is a Kurdish artist and journalist from Diyarbakir, Turkey. She is a founding editor of the all-female news agency Jin News Agency (JİNHA), one of the many media outlets to have been closed in Turkey in the wake of the failed coup in 2016.

Zehra herself was also among the many journalists to be arrested and imprisoned in Turkey. In 2017, she was sentenced to two years, nine months and 22 days in prison for ‘terrorist propaganda’ because of her news coverage, social media posts, and a painting she had shared on social media.

Her imprisonment prompted international outcry and in 2018, fellow artist Banksy – who contributed an original piece for the 2017 Art the Arms Fair – created a mural in her honour in New York.

A key case of concern to PEN and other freedom of expression organisations throughout her time in detention, Zehra was finally released from prison in February 2019. She arrived in London in March 2019 to begin her residency with English PEN and, in April 2019, won the Index on Censorship Freedom of Expression Award for Arts.

The wars in the Middle East are going on for decades not only shaping the land and the maps but also shaping people’s lives. More money is spent for wars compared to feeding the people, so people get more weapons than food. Their silence isn’t heard in the rest of the world.

Art the Arms Fair is a cultural response to one of the world’s biggest arms fairs taking place in London. The DSEI Arms Fair 2019 will include Turkey among its delegates trading in weapons for conflict and repression. This year’s exhibition includes pieces by over 70 artists such as Sir Anish Kapoor, Shepard Fairey, Peter Kennard and Hito Steyerl alongside the painting by Zehra Doğan.

Art the Arms Fair raises awareness of London’s DSEI arms fair, where weapons used for repression will be sold to countries with shocking human rights records, including Turkey, who put Zehra Doğan in prison for painting the destruction of a Kurdish region by Turkish security forces. Zehra Doğan is unstoppable and globally inspiring in her fight for justice and freedom of expression. We are honoured to be able to exhibit and sell her painting.

English PEN has a long history of supporting writers at risk and in prison in Turkey, currently the world’s biggest jailer of journalists, including through the ongoing Free Turkey Media Campaign.

English PEN is one of the world’s oldest human rights organisations, supporting the freedom to write and the freedom to read both here in the UK and internationally.

The arms trade, war and violence are a cause of the death, displacement and misery of millions, including many of the brave writers and artists we work with. Our writer and artist in residence, Zehra Doğan – one of the many contributors to this year’s fair – is one such writer.

The arms trade is also a direct attack on the most basic of human rights – and the UK’s dependence on it remains a significant obstacle to us challenging human rights abuses around the world.

We are proud partner with Art the Arms Fair as they seek to shine a light on this year’s DSEI arms fair and the wider impact of arms sales around the world through this collaboration with Zehra Doğan.