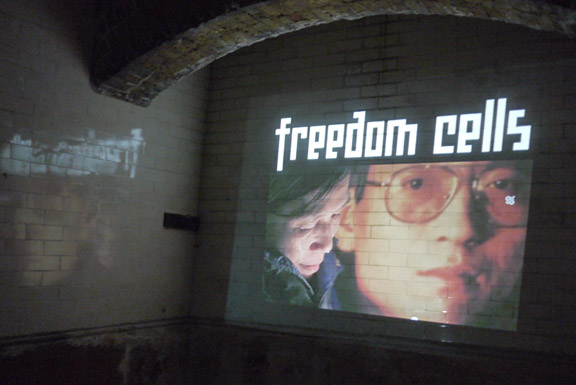 Next Saturday, 19 May, the Old Police Cells Museum in Brighton will be playing host to an afternoon of films by human rights filmmakers, artists and students. A temporary pop-up cinema space under the cells in Brighton Town Hall will show a selection of features and short films about the ongoing struggle for freedom of expression and the political prisoners at the forefront of this struggle.

In 2010, the Chinese writer, academic and activist Liu Xiaobo was awarded the Nobel Peace Prize for his long and non-violent struggle for human rights. This moving documentary offers a unique insight into the only Nobel Peace Prize laureate currently in detention.

In 2009, three student journalists crossed the frontlines in the wake of civil war in Sri Lanka. In doing so they became – and remain – the only independent journalists to have visited the final battlegrounds. This is the story of what they found there.

Maung Thura, better known as Zarganar, is Burma’s greatest living comic. In 2008, he was sentenced by Burma’s generals to 59 years behind bars… he is now free. This film was part of the campaign that led to Zarganar’s release in 2011.

The personal story of Irina Bogdanova, the sister of imprisoned Belarus presidential candidate Andrei Sannikov. Made in 2011 and narrated by Joanna Lumley, the film exposes a tale of kidnap, torture and state-sponsored murder.

Admission is free but as places are limited, booking is essential.

To book a place, email [email protected] giving your name, number of places required and which film or films you would like to attend.

The Old Police Cells Museum is in the basement of Brighton Town Hall. Access is through the main entrance.

The Lanes Car Park can be accessed from Kings Road and Black Lion Street. Churchill 1 and Churchill 2 car parks are within walking distance.