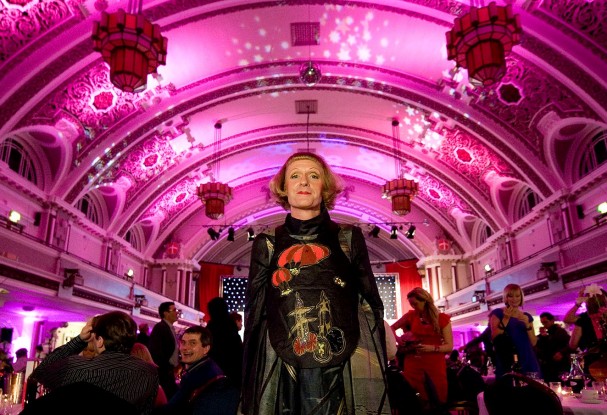 Launched in 2011, ‘Inspirations’ offers the chance to discover the major influences in the lives and careers of leading figures in the arts. Previous speakers have included Simon Armitage, Patience Agbabi, Linton Kwesi Johnson and the late Seamus Heaney.

This edition of ‘Inspirations’ will take place at 7 pm on Tuesday 29 March 2016 at the Royal Geographical Society’s Ondaatje Theatre. Perry will select the works that have influenced him most and discuss these with a live audience.

An award-winning artist working across a variety of media including embroidery and photography, Perry has received widest acclaim for his ceramic works. He is best known for his classically shaped vases covered with figures, patterns and text and was the first ceramic artist to win the prestigious Turner Prize. In 2014, he was awarded a CBE.

Alongside his art, Perry has written and presented several documentaries and is known as a leading voice on transvestism. His documentary Why Men Wear Frocks for Channel 4, in which he examined transvestism and masculinity in the 21st century, speaking candidly about his own experiences, received a Royal Television Society Award for Best Network Production. His 2014 programme Who Are You? led to the accompanying artwork from the series being housed in the National Portrait Gallery: a first for the Gallery. Among other awards, Perry has also won Documentary Presenter of the Year at The Grierson Awards.

Early bird tickets can be purchased for £30 until 31 January, afterwards at £50 at https://www.freewordcentre.com/events/detail/english-pen-presents-inspirations-with-grayson-perry

‘Inspirations’ is a fundraising event to support the work of registered charity English PEN, the founding centre of the worldwide writers’ organisation promoting and supporting freedom of expression. Recent campaigns include the successful intervention at the Supreme Court on behalf of musician James Rhodes and his injuncted memoir, Instrumental; a long-running campaign to free the Saudi Arabian blogger Raif Badawi; the overturning of the government’s ban on sending books to prisoners; and campaigns to reform criminal defamation and libel reform. English PEN also runs an extensive ‘Writers in Translation’ programme and a range of outreach programmes which involve sending writers into prisons and refugee centres to facilitate workshops.