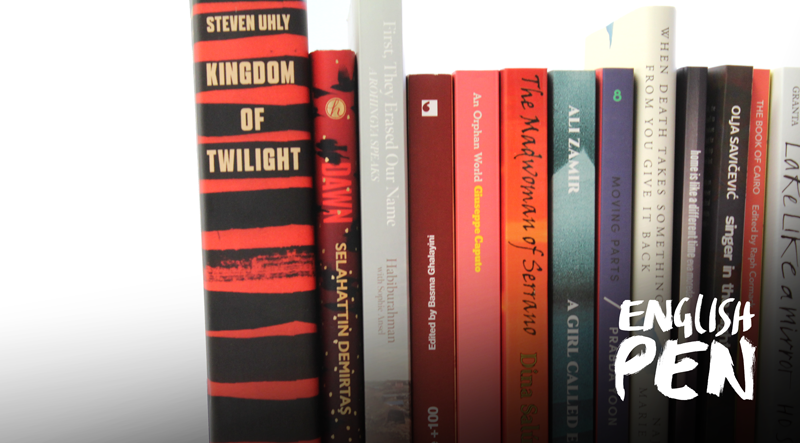 Books from 14 countries and 12 languages have won English PEN’s flagship translation awards. They include literary fiction, non-fiction, crime, poetry, and YA literature, and – for the first time – titles from Guinea, Algeria and Benin, and work translated from the Gun and Kurmanji.

Among the awarded titles is the first collection of Kurdish speculative fiction ever to be published in the UK.

10 PEN Translates award-winning books have now featured on International Booker Prize longlists, and The Eighth Life by Nino Haratischvili, translated from the German by Charlotte Collins and Ruth Martin, and supported by PEN Translates, won the 2020 Warwick Prize for Women in Translation.

These fifteen books are significant works of literature. Remarkably varied, they are united in being astonishingly good reads. I am pleased that PEN Translates continues to foster internationalism, diversity, talent, and literary quality in the UK market – particularly at a time in which the movement of literature and ideas across borders is so vital. These books will make their marks over the coming years.

In challenging times for the UK publishing industry, it’s important to acknowledge that disruption also offers exciting opportunities for reimagining a more internationalist future. The PEN Translates Selection Panel was inspired by the calibre and range of submissions. This outstanding list includes poetry from Belarus and Benin, historical YA fiction from the Algerian Arabic and short stories as Kurdish speculative fiction, as well as the spoken account of Ibrahima, an undocumented Guinean migrant, whose life-story is rendered into English by Timberlake Wertenbaker. We’re excited to be supporting a diverse range of publishers too – from the new and innovative Afropolitan Digital to Jonathan Cape in its centennial year. This is what PEN Translates means by ‘inclusive’: a bookshelf that makes space for all kinds of readers, where the offering is great literature telling important stories and sharing fresh perspectives, in exceptional translation.

Books are selected for PEN Translates awards on the basis of outstanding literary quality, the strength of the publishing project, and their contribution to UK bibliodiversity. PEN Translates has now awarded over £1m in funding.

Oldladyvoice by Elisa Victoria, translated from the Spanish by Charlotte Whittle (And Other Stories). Country of origin: Spain.

In My Garden of Mutants by Volha Hapeyeva, translated from the Belarusian by Annie Rutherford (Arc Publications). Country of origin: Belarus.

Voice of the Two Shores by Agnès Agboton, translated from the Gun and Spanish by Lawrence Schimel (flipped eye publishing). Countries of origin: Benin and Spain.

The Djinn’s Apple by Djamila Morani, translated from the Arabic by Sawad Hussain (Neem Tree Press). Country of origin: Algeria.

A Feminist Reading of Debt by Luci Cavallero and Veronica Gago, translated from the Spanish by Liz Mason-Deese (Pluto Press). Country of origin: Argentina.

Punishment of a Hunter by Yulia Yakovleva, translated from the Russian by Ruth Ahmedzai Kemp (Pushkin Press). Country of origin: Russia.

The Blue Pen by Samar Yazbek, translated from the Arabic by Leri Price (World Editions). Country of origin: Syria.