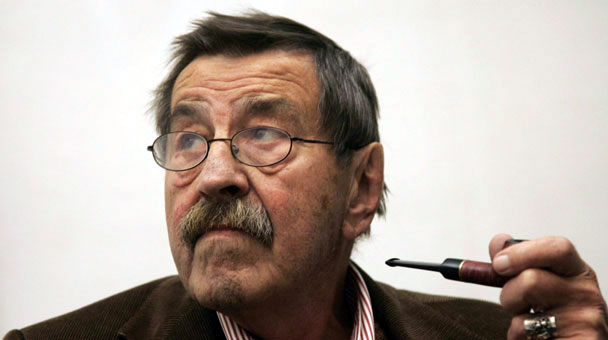 The Nobel Literature Prize laureate was a member of the German PEN centre and one of his last public acts was to join hundreds of fellow writers in signing a statement calling on the European Parliament to afford greater protection to refugees.

Throughout his career, Grass’s literary output often prompted controversy and calls for censorship.  He frequently wrote about issues that were deemed taboo in Germany, and his seminal novel The Tin Drum (1956) was branded ‘blasphemous’ and ‘pornographic’ by some critics (even being publicly burnt at a protest in Dusseldorf).  In 2012, his poem ‘What Must Be Said’ so angered the Israeli government that he was banned from travelling to that country.

Grass also campaigned on environmental and social justice issues.  At the 1986 PEN congress, he clashed with Nobel laureate Saul Bellow over freedom and poverty in America.

[Mr Grass] said that while listening to Mr. Bellow talk about democracy giving Americans not only freedom, but also food and shelter, he had to wonder where he was.

Mr Grass, who has frequently criticized the United States in the past, added that America is a powerful country that protects dictatorships in Turkey and Pakistan.

At the same event, the novelist Nadine Gordimer (herself awarded the Nobel Prize in 1991) described the paradigm shift in German literature that Günter Grass had achieved:

Nadine Gordimer, the South African writer, said that hearing Mr. Grass speak reminded her of the role he played in West Germany after the war – a role ”that he played not in his public speeches but in his imaginative writing to re-establish the honesty of the German language to clear it of the garbage that came up during the Hitler time.”