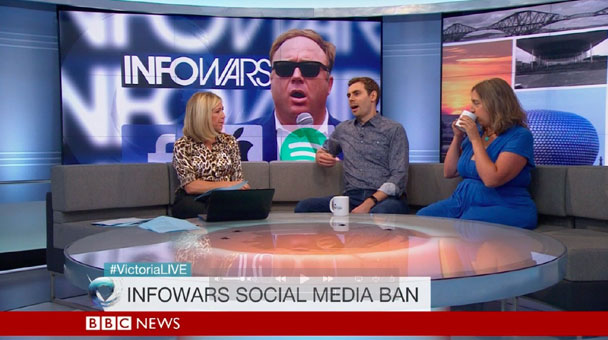 On 7 August 2018 Robert Sharp was invited on to the BBC Victoria Derbyshire programme to discuss the banning of InfoWars by social media companies.

Robert noted that the limits of free speech begin when someone incites violence against other people, but expressed concern that private companies in Silicon Valley could effectively determine who gets to participate in public debate. He called for social media companies reform their Terms of Service to reduce ambiguities over what is and is not permitted on social media.

Clips from the show are below, or you can watch the entire discussion on YouTube. The full programme is on the BBC iPlayer until 7 September.

Here's @robertsharp59 for English PEN on the BBC, attempting some nuance on the #infowarsban pic.twitter.com/ryhWAl0SSg

Robert also wrote a blog post about the controversy, setting out some of the difficulties that arise when extremist groups are banned from speaking.