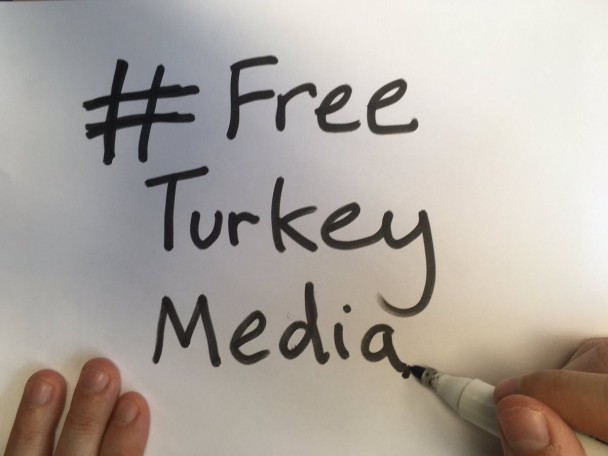 In April 2018, President Erdoğan announced a snap election in Turkey. The election is due to take place on 24 June 2018, nearly 18 months before it was expected to do so and under the ongoing State of Emergency. Following the unprecedented crackdown on opposition journalists in the wake of the attempted coup of 2016, there are understandably widespread concerns that the media is not in a position to ensure that the public is fully informed ahead of casting their votes. One leading writer from Turkey has described the decision as ‘a way of stealing our power’.

Attempts to silence journalists have by no means abated in 2018. This week saw harsh sentences handed down to our former writer-in-residence Ahmet Şık and his colleagues at Cumhuriyet, the oldest independent newspaper in Turkey. On learning of the sentence, Şık, defiant as ever, declared:

Do not despair. No dictatorship has ever won the fight to silence those who are right. We will win.

Cumhuriyet’s Editor-in-Chief Murat Sabuncu, was also among those sentenced. His comments echoed sentiments that have been shared by many of our fellow writers in Turkey since July 2016:

Journalists used to be witnesses of news and history. Now journalists are acting as witnesses in a trial in which their colleagues are being prosecuted, and this will go down in history, too.

While Şık and Sabuncu remain free pending appeal, travel bans have been placed on them and their co-defendants in a clear attempt to silence them not only in Turkey but in the international arena.

There have been some further developments, for example on 26 April when leading writer Ahmet Altan was finally acquitted of ‘insulting the President’ in relation to an interview given three years earlier. While Ahmet has described the verdict as a momentous decision for freedom of expression it can bring little comfort to his family and supporters as he and his brother, the academic Mehmet Altan, continue to serve life in prison without parole on separate charges of ‘attempting to overthrow the constitutional order’.

English PEN is also deeply concerned about the many academics and publishers on trial or otherwise at risk in the wake of the coup. According to our latest report ‘Turkey: freedom of expression in jeopardy’, co-authored by experts Yaman Akdeniz and Kerem Altiparmak, more than 5000 academics have been dismissed and 30 publishing houses have been shut since the failed coup in July 2016.

With so many of our fellow writers in prison or at risk in Turkey, it is essential that we come together to support our imprisoned colleagues. Please join us.

UPDATE: President Erdoğan is coming to the UK and will reportedly be meeting Theresa May on Tuesday 15 May. Join our #FreeTurkeyMedia protest, 9 – 11 am on 15 May outside Downing Street.

Ahead of this year’s World Press Freedom Day, we are asking fellow journalists, writers, and supporters of freedom of expression to show their support for the many journalists and writers currently imprisoned and on trial in Turkey. Please follow @FreeTurkeyMedia on Twitter and show your support by tweeting a photo with a sign reading #FreeTurkeyMedia (#GazetecilikSuçDeğildir) Please also tag @englishpen and include #WPFD2018 if you have space.

• Calling for all detained writers and journalists to have access to lawyers and to be released if they are not to be charged with a recognisably criminal offence and tried promptly in accordance with international fair trial standards;
• Calling on the authorities not to use the state of emergency to crack down on peaceful dissent, civil society, media and education.