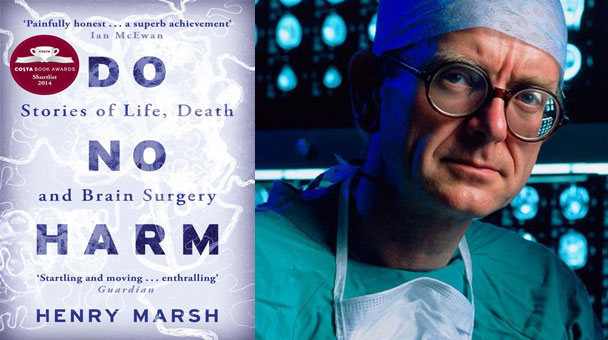 The book is a candid reflection on Marsh’s career as a leading neurosurgeon, describing how surgeons work, the lives they save, and the mistakes they make.

The prize was awarded on Monday 29 June 2015 at the English PEN Summer Party. Henry Marsh received a cheque for £3,000.

Several widely praised and heavily garlanded autobiographies were published in 2014, but the PEN Ackerley judges felt that few of these delivered on their promise. Henry Marsh’s Do No Harm was, outstandingly, one that did, demonstrating all the qualities that can be found in J R Ackerley’s own books: beautifully written, recklessly honest and morally complex.

Marsh writes superbly about the intricacies of the human body, about the sometimes conflicting impulses of professional ambition and human need, and about the difficulty of talking honestly to patients and their families in times of medical crisis. These ‘Stories of Life, Death and Brain Surgery’ present a compelling argument about the moral dimension of surgical intervention and build to a touching and rueful self-portrait.

The PEN Ackerley Prize is the UK’s only literary prize dedicated to memoir and autobiography. It was established in memory of J R Ackerley, the author and literary editor.  The prize is judged by the trustees of the J R Ackerley Trust: biographer and historian Peter Parker (chair), historian and biographer Richard Davenport-Hines, author Georgina Hammick, and writer and painter Colin Spencer.

Three other books were shortlisted for this year’s prize: Other People’s Countries by Patrick McGuinness (Jonathan Cape); An Encyclopaedia of Myself by Jonathan Meades (4th Estate); and The Setting Sun by Bart Moore-Gilbert (Verso).