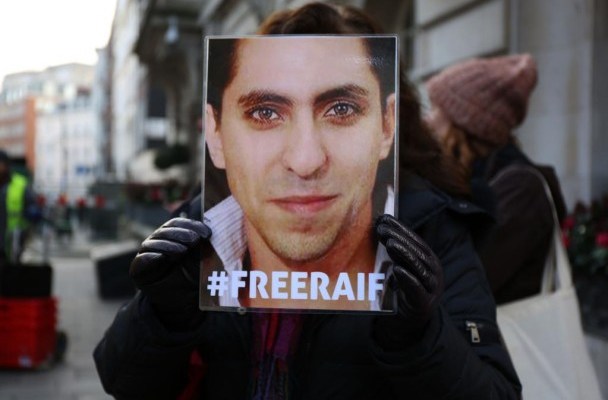 English PEN is hugely relieved that blogger Raif Badawi, the winner of our 2015 PEN Pinter Prize for an International Writer of Courage, has finally been released from prison in Saudi Arabia.

Raif Badawi, who was sentenced to 10 years in prison in violation of his right to freedom of expression, was due to be released from prison on 28 February 2022 but continued to be held in Dhahban Central Prison until his release on 11 March 2022.

Raif Badawi has been a key case of concern to PEN since he was sentenced to ten years in prison, 1,000 lashes, a fine of 1 million riyals, and a ten-year travel ban following the completion of his prison sentence.

Throughout Badawi’s time in detention, English PEN and fellow supporters have held many protests and vigils at the Embassy of Saudi Arabia in the United Kingdom, calling on the authorities to release him and others detained in violation of their right to freedom of expression. We co-hosted a rally at Downing Street and organised meetings in the UK parliament to draw attention to his plight and urge the British government to raise his case with the Saudi authorities.

We were honoured to welcome his wife Ensaf Haidar, who together with her three children has been relentlessly campaigning for his release, to the United Kingdom, and we were proud to name Raif Badawi as the winner of the PEN Pinter Prize for an International Writer of Courage in 2015.

We are hugely grateful to the many PEN members and supporters who have been actively involved in campaigning for his release. In particular, we would like to send our thanks to all those who regularly attended vigils in support of Badawi and other writers of concern in Saudi Arabia, including his lawyer and fellow PEN Pinter Prize winner Waleed Abulkhair.

While we welcome the news of Raif Badawi’s release from prison, we are deeply concerned that the ten-year travel ban remains in place and that, according to reports, he will not be able to ‘leave the kingdom for another 10 years unless a [royal] pardon is issued.’ We continue to call on to the Saudi Arabian authorities to lift this travel ban so that Badawi can be reunited with his wife and children who reside in Canada at the earliest opportunity.