Stand With Saviano – messages of solidarity 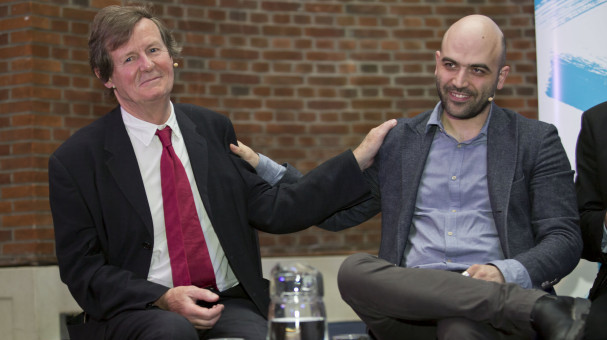 Award-winning Italian writer Roberto Saviano has been living under police protection for over a decade,  following threats received from the criminal organisations he has denounced in his work. He is now facing up to three years in prison on charges of defaming Italy’s interior minister and deputy prime minister Matteo Salvini.

In 2011, Saviano was chosen as the winner of the PEN Pinter Prize for an International Writer of Courage by fellow winner and writer Sir David Hare. When he and Hare met several years later in London, Saviano stated:

Sharing the PEN Prize protected me. It lit the darkness I was in. It was fundamental!

Saviano has often spoken about how important support from fellow writers and the international community has been to him over the years. In light of the current case against him, we are inviting PEN members to send messages of solidarity for us to share with him and online.

Roberto Saviano is one of the most important writers in Italy, whose only crime is to tell the truth. The Italian government is already one of the most despised administrations in Europe. If it allows its Minister of the Interior to pursue this dishonest prosecution, then its international reputation will be in the gutter.

I stand with you Roberto Saviano, as President of English PEN, as a lawyer, as a human being – totally committed to your freedom of expression and the rule of law.

I can only admire the courage of Roberto Saviano in daring to speak the truth to a regime which is too corrupt and morally enfeebled to bear it.  Heartbreaking to see one of the great civilisations of Europe reduced to this kind of persecution.

I stand with Roberto Saviano, protest against his trial for exercising his human and democratic right, what should be a normal, everyday right, to criticise a government minister.

I send him my love and admiration.

Roberto — we stand with you and — along with our feelings of anger and outrage —  send all our sympathy, solidarity and support. PEN is on your side 100% as are all your fellow writers in the Untied Kingdom. Stay strong!

I stand with Roberto Saviano because the option of not standing with him simply does not exist. He personifies the courage and integrity that most journalists and writers aspire for. He is willing to stand up and be counted, as he glares back at bullies and investigates the dark underbelly of crime and corruption.

I stand with Roberto Saviano who has been exposed over these past years to incredible campaigns against him and his books made of false accusations and allegations. Mafiosi are very powerful and can destroy the image and dignity of whoever. Praise to Roberto who has always proven to be stronger than those who want him silenced forever. Thank you for supporting him abroad. He needs attention and awareness and light cast on him in order to discourage those evil criminal organization from harming him and his ideas.

If you would like to send a message of support to Roberto Saviano, you can do so via [email protected]

Please share your messages and details of the case with friends and colleagues, and on social media using the hashtag #StandWithSaviano