The Kafkaesque case of a visual journalist: don’t forget Fevzi! 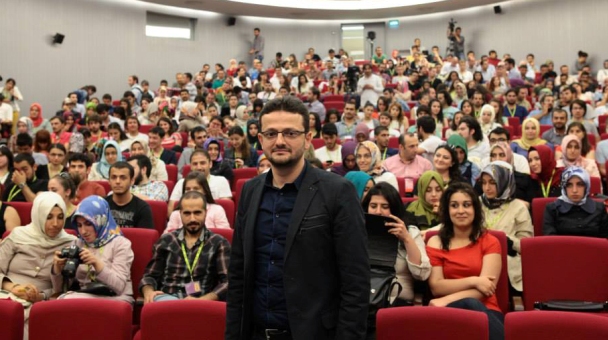 In the arduous and troubled history of Turkish democracy, there is no scarcity of absurd charges against intellectuals. From the late Ottoman era to modern times, dozens of writers, artists, and journalists have been punished by exile or imprisonment, even by death (as in the case of the author Sabahattin Ali) for expressing their opinions.

Regrettably, the tradition of oppressing the dissident has not come to an end in Turkey. On the contrary, what we have witnessed in the past couple of years is one of the darkest chapters of the country‚Äôs history. ¬†The Turkish state has presented absurd, even laughable charges in an attempt to silence journalists. We have seen several ridiculous accusations against writers and journalists, from the trial of Cumhuriyet staff to the case of Altan Brothers. But, among all indictments, probably the most absurd and nonsensical is that filed against Fevzi Yazƒ±cƒ±.

An award-winning visual journalist and the former art director of Zaman newspaper, Fevzi Yazƒ±cƒ± has been in jail since July 2016. After several months of waiting, he was put on trial earlier this year. The verdict was three consecutive life sentences. His crime? ‚ÄòAttempting to overthrow the constitutional order‚Äô by attending a meeting regarding a newspaper advertisement which allegedly hinted at or encouraged the notorious July 2016 coup attempt.

Remembering the gloomy epochs of Turkish history, people tend to think of poets and writers as victims of political repression. However, visual artists have often faced oppression as well. Most famously, Abidin Dino, a prominent Turkish painter, was forced into in exile. I see Fevzi Yazƒ±cƒ± and Zehra Doƒüan, another journalist and painter who is currently in prison, as successors of this tradition.

Fevzi is a world-class designer with a number of awards and achievements. In a biographical note, he recalls how he fell for visual arts at an early age: ‚ÄòI have been drawing and designing since I knew myself. I began by drawing in the margins of my older siblings‚Äô notebooks. After college, my passion reached another level.‚Äô After attending a prominent art school in Istanbul, he studied in the United States for three years. Upon his return to Turkey, Fevzi became one of the most successful visual journalists in the country.

Fevzi Yazƒ±cƒ±‚Äôs work as a visual journalist has been the gold standard. His artistic approach at Yeni Y√ºzyƒ±l daily and later at Zaman changed many habits in the Turkish print media, which had largely been a parade of tasteless front pages regarding design. Fevzi successfully combined critical journalism with the art of design. It is not a coincidence that Zaman was a recipient of Society of News Design (SDN) awards for thirteen years in a row. In 2015, Fevzi was also honored by being a member of the SDN jury.

Now, Fevzi Yazƒ±cƒ± is serving his sentence in solitary confinement at Istanbul‚Äôs Silivri Penitentiary, the notorious prison that currently hosts many fellow journalists. At the age of 46, Fevzi spends the time that might have been his most productive in a cell, alone. Even seeing a doctor is a big challenge for him. While mafia leaders, rapists, and terrorists walk freely from Turkish courts, Fevzi is denied his freedom and basic human rights.

Yet he is not pessimistic. He keeps himself busy in jail thinking about journalism, art, and his craft. It is the way that he seems to respond to the injustice: by sticking to his art. His drawings¬†and writings from prison have occasionally been published as ‚ÄòFree Notes of a Prisoner.‚Äô Even in solitary confinement, he shows his hunger for life. Despite facing aggravated lifelong imprisonment, Fevzi‚Äôs eagerness to persist makes me think of Rilke‚Äôs poem:

In a recent piece, Fevzi describes the Kafkaesque circumstances of his trial to make us visualise the courtroom: ‚ÄòPlease try to imagine it. As a defendant, your place is in the lowest part of the courtroom. Except for you, everyone is on elevated ground. The defence lawyers on the right and even the lawyers for the co-plaintiffs on the left look down on you. Yet it is possible to ignore their elevated positions. The positions of the judge and the prosecutor on the opposite sides of you are extremely exaggerated. If the defendants are on the ground, they are above the clouds. What is missing between the defendants and the panel of judges is a ditch filled with crocodiles!‚Äô

Fevzi is in prison because he believes that the definition of journalism is telling the truth at all costs. This is the price he pays: now, his two young sons are waiting to see their father again. As Oscar Wilde would remind us, unjust imprisonment for a noble cause strengthens as well as deepens the nature of a person. I believe someday Fevzi will be free and stronger than ever.

On World ¬†Press Freedom Day, please do not forget Fevzi Yazƒ±cƒ± and the many other unfairly accused journalists in Turkish prisons.

Fevzi concludes his last letter to the free world by urging the authorities: ‚ÄòLet this country‚Äôs artists and journalists be!‚Äô

The echo of his words sums up the darkness and despair of our time.

*Can Bahadƒ±r Y√ºce is a poet, academic, and journalist. He lives in the United States.*

We’re asking all of four members and supporters to show your support Fevzi Yazƒ±cƒ± and other journalists in prison or otherwise at risk in Turkey this World Press Freedom Day. More details and suggested actions here.¬†