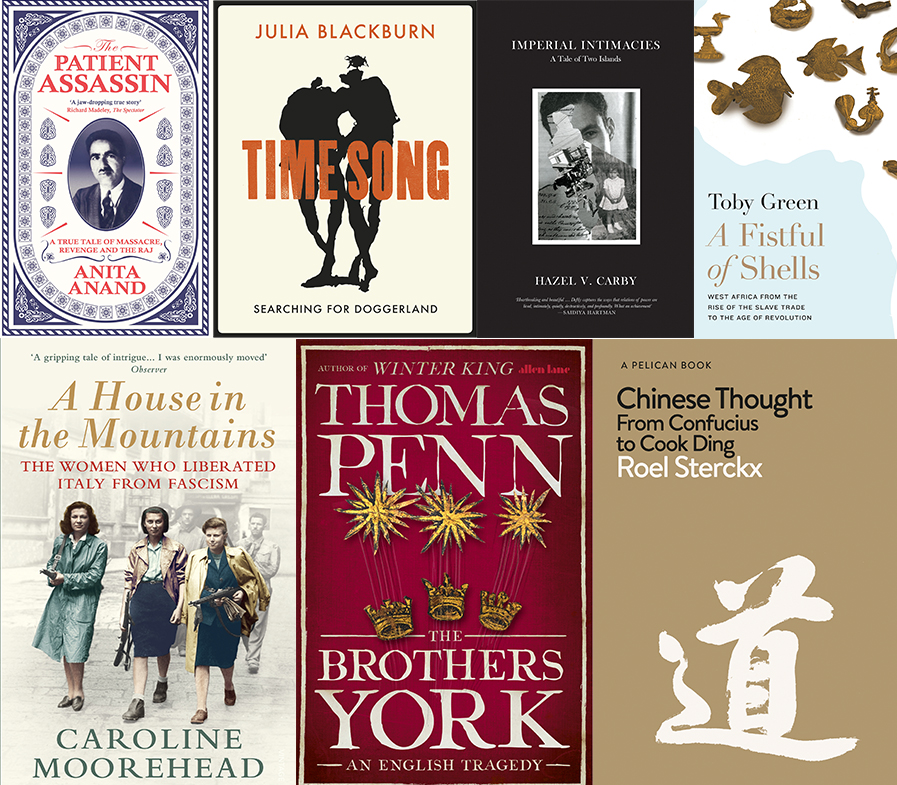 ‘a shortlist of astonishing chronological and geographical variation, bound together by one factor: innovative and pathbreaking historical research.’

English PEN is pleased to announce the seven shortlisted titles for the PEN Hessell-Tiltman Prize for History 2020. The prize, endowed by former PEN member Marjorie Hessell-Tiltman’s bequest, celebrates the best non-fiction on any historical subject.

This year’s judging panel for the PEN Hessell-Tiltman Prize is chaired by Rana Mitter, Professor of the History and Politics of Modern China, University of Oxford; and he is joined by Dr John Gallagher, Lecturer in Early Modern History, University of Leeds; and Rebecca Rideal, historian, broadcaster and director of history festival HistFest.

The winner will be announced on Thursday 26 November 2020.

This is a shortlist of astonishing chronological and geographical variation, bound together by one factor: innovative and pathbreaking historical research. Two works combine historical depth with memoir, Hazel V Carby’s moving account of her search for her family history between Britain and Jamaica in Imperial Intimacies, and Julia Blackburn’s Timesong, which moves between prehistory and the present day with huge aplomb. Modern history is well-represented with Anita Anand’s The Patient Assassin showing us how empire continues to haunt us, and Caroline Moorehead’s A House in the Mountains recalling the fight against fascism in the 75th year since the end of World War II. Thomas Penn’s The Brothers York is a meticulous study of medieval monarchy, and Toby Green’s A Fistful of Shells opens up a story of West Africa in the early modern era known to few westerners. Roel Sterckx’s Chinese Thought opens up an intellectual and emotional world thousands of years and as many miles distant from our own experience in the west. This range and depth is a highly positive sign of the vigour of history writing today.

The PEN Hessell-Tiltman prize of £2,000 is awarded annually for a non-fiction book of specifically historical content. Entrants are to be books of high literary merit – that is, not primarily written for the academic market – and can cover all historical periods.

Dr John Gallagher is a Lecturer in Early Modern History at the University of Leeds and author of Learning Languages in Early Modern England (Oxford University Press, 2019). He is a BBC/AHRC New Generation Thinker and has written and presented documentaries on BBC TV and radio, as well as writing for the Guardian, the Irish Times, the London Review of Books and others.

Rana Mitter OBE FBA is Professor of the History and Politics of Modern China, and a Fellow of St Cross College at the University of Oxford. His books include Forgotten Ally: China’s World War II, 1937-1945 (Houghton Mifflin Harcourt, 2013; UK title, China’s War with Japan), winner of the 2014 RUSI/Duke of Westminster’s Medal for Military Literature, named a Book of the Year in the Financial Times and Economist; and China’s Good War: How World War II is Shaping a New Nationalism (Harvard, 2020). He won the 2020 Medlicott Medal of the Historical Association.

Rebecca Rideal is a historian, broadcaster, consultant, and director of the history festival, HistFest. As a former television researcher and producer, she developed the Emmy award-winning David Attenborough’s First Life and the BAFTA-winning Flying Monsters with David Attenborough. She writes regularly for press and is the author of 1666: Plague, War and Hellfire. She is working towards her PhD at Royal Holloway, University of London, and has tutored at UCL, Bath Spa University and Oxford University.