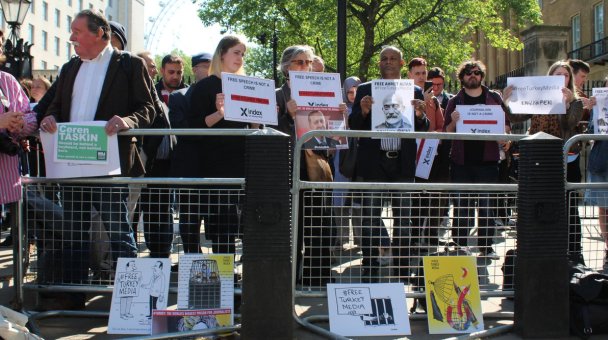 For the attention of:

We, the undersigned organisations, urge the addressed European Union (EU) officials to discuss Turkey’s freedom of expression crisis and fractured rule of law during their high level political dialogue with the Turkish government on 22 November 2018.

More than 160 journalists are imprisoned in Turkey today, with hundreds more on trial for exercising their right to freedom of expression. In 2018, the World Press Freedom Index ranked Turkey as 157 out of 180 countries, on the basis of the level of freedom available to journalists. Since 2016, Turkey’s position in the index has progressively decreased from 151 in 2016 and 155 in 2017. Journalists and media outlets are mostly targeted on charges of affiliation with, membership of, or propaganda for a terrorist organisation, charges mostly linked to the attempted coup of July 2016. Despite the lifting of a two year-long state of emergency on 18 July 2018, and its replacement with similarly restricting legislation, such attacks are still taking place. Just last week, on 16 November 2018, in a targeted operation against civil society,13 people including academics, journalists and lawyers were arrested on suspicions of similar charges, some of whom were subsequently released under judicial control.

Following the attempted coup in July 2016, the Turkish authorities cracked down on independent press and journalists, resulting in widespread closures of media outlets, dismissal of 10,000 media workers and mass prosecutions of journalists. The Turkish judicial system has thus far failed to provide redress in these cases, a further sign of the deterioration of the rule of law in Turkey.

The European Court of Human Rights (ECtHR) response to this situation has been weak until now: focusing on the need to exhaust domestic remedies as a principle of admissibility of cases before the Court, and failing to fully recognise the impact of the repression of which Turkish journalists and civil society are the victims. Where ECtHR rulings on journalists have been made they have been blatantly ignored and not implemented by the Turkish authorities. Newly introduced legislation in Turkey, dovetailing in many cases provisions concerning purportedly temporary and exceptional measures introduced under the state of emergency in order to respond to the attempted coup, also casts a shadow over respect for human rights in the country.

We remind you that pursuant to the Treaties, the European Union’s “aim is to promote peace, its values and the well-being of its peoples” and that “in its relations with the wider world, the Union shall uphold and promote its values and interests”, including contributing to the protection of human rights. Given the mandate of your roles within the European Union’s system, we urge you to include the above-mentioned issues at the heart of your conversation with the Turkish government during the high level political dialogue planned in Ankara on 22 November 2018. In particular, we request you to engage with Turkish authorities with a view to agreeing on concrete actions aimed at the protection of journalists and human rights defenders in Turkey, for the respect of the right to freedom of expression in Turkey. Finally, we demand that the EU stresses the need for Turkey to concretely improve its respect for the rule of law and human rights, as a prerequisite for a further deepening of the EU-Turkey relationship.