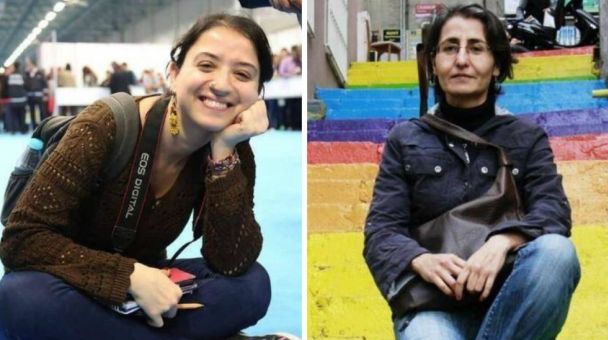 The first hearing of two journalists, editor Semiha Şahin and reporter Pinar Gayip began yesterday, 10 September, at Istanbul’s Çağlayan Court House. They are accused of ‘membership’ of what the government considers a ‘terrorist organisation’, MLKP (Marxist, Leninist, Communist Party). They were tried alongside two colleagues, Ferhat Harun Pehlivan and Gülsen İmre, who are accused of ‘conducting propaganda for a terrorist organisation’. They are all staff at the agency ETHA, the newspaper for the Socialist Party of the Oppressed, a subgroup of the Peoples’ Democratic Party (HDP) and the government’s main opposition. The detainees arrived late from their respective prisons, handcuffs removed once in the courtroom. There were two prison security officers per detainee present, sitting between them and the public. The small courtroom was full of family, friends, reporters and international observers, including myself as as representative of English PEN. One of the journalists on trial, Pinar Gayip, was herself a former court reporter. The defendants first gave their statements, Şahin stating her hope for her own release as well as of the 84 journalists who are facing trial this week. She also thanked every journalist present in the room for bearing witness. In Gayip’s statement she described her process of being detained, stating that since moving to Istanbul she has always lived in the same flat, worked for the same agency, and attended the same courts almost daily to report on trials. She stated that police never once called her in to testify on any case: instead they raided her house in the middle of the night with masks and rifles. She criticised the evidence that had been presented against her, stating:

The news that ETHA published regarding Semiha and I having been detained has been counted as evidence of a crime.

Details of the hunger strike the two journalists undertook during the week following their initial detention has also been presented as evidence of a crime being committed. She closed her statement by saying:

I am sure I will be acquitted if the court abides the law.

The four representatives of the defendants then delivered their technical defence, listing the unlawful use of evidence and unlawful pre-trial detention. The defence concluded that ‘if there is no definite conviction that a person has committed a crime, ruling for the continuation of the defendants’ detention would be a very harsh decision. Any court ruling should also be based on good conscience.’ The prosecutor then asked for the detention of the defendants to be sustained. Following two hours of statements, the public were suddenly ushered from the court by private security personnel. Words of support and kisses were blown over the backs of the eight prison security to the detainees by families and supporters. After being escorted past a security checkpoint, they were given the news that the head judge had made the illegal request to have no public present whilst the preliminary decision was issued to the defendants. This was met with protest and calls for legal conduct to be made and international law to be adhered to. It was announced that the defendants would remain detained until the next hearing on the 5 of December. There was visible frustration from the crowd of families and witnesses. The logic and rationality behind all eight statements heard today fell on deaf ears as the prosecutor and judges confidently broke international law in their decisions and their behaviour towards the public and international observers. This illustrates the near redundancy of the trials occurring over the course of this month and the true reasoning behind why these journalists are being detained- to punish voices that are deemed critical of the government. The journalists, observers and families frustration was tangible but they continue to attend these trials in order to bear witness. Debbie Luxon is a freelance writer, queer activist and free speech campaigner currently based in Istanbul. @DebLuxon