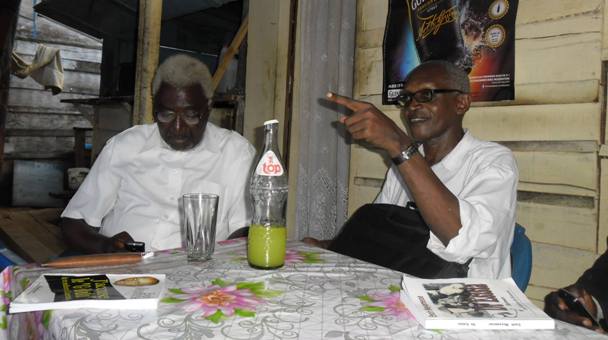 On 27 April 2015, writer and activist Enoh Meyomesse was finally released from Kondengui Prison in Yaoundé, after almost three and a half years.

He has since sent the following message to PEN:

I don’t have strong enough words to thank you for all the help that you have provided over the last three years, in other words throughout the duration of my incarceration…

Enoh Meyomesse has been a major focus for English PEN’s Writers at Risk Programme and we are overjoyed that he has finally been released from prison. PEN and our supporters stood with Enoh throughout his detention – lobbying the Cameroonian authorities; sending books and messages of support; providing writing materials when he was prevented from accessing the computer rooms; securing and delivering relief grants and other essential funds; staying in close contact with his friends and supporters on the ground; urging British representatives in Cameroon – successfully – to attend trial hearings; and by translating, crowd-sourcing translations, and publishing his extraordinary writing.  In turn, Enoh added his voice to our Books for Prisoners Campaign, which called for UK prisoners to be allowed to receive books from loved ones in the post, writing a piece in support of the campaign directly from his prison cell.

We will be posting further information and suggested actions shortly, and will continue to do what we can to provide Enoh with the support required as he rebuilds his life over the coming months.

In the meantime, if you would like to send a message of support to Enoh, please do so here or via [email protected]

Thank you so much to everyone that has taken action for Enoh Meyomesse over the last few years. We are hugely grateful for your support.