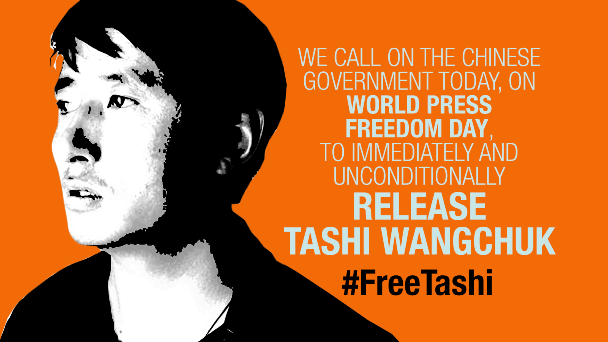 Tibetan language advocate Tashi Wangchuk has been detained for more than three years on charges of ‘inciting separatism. To mark this year’s International Mother Language Day, English PEN has joined fellow organisations concerned with freedom of the press and human rights in Tibet and China to call for his immediate and unconditional release.

We are writing to you on International Mother Language Day, a day to embrace and enjoy cultural and linguistic diversity and multilingualism. Every year since 2000, this day has been marked around the world with the aim of promoting peace and preserving mother tongues, one of the most deeply precious aspects of every peoples’ cultural heritage. The theme of International Mother Language Day 2019 is “Indigenous languages matter for development, peace building and reconciliation”.

The right of peoples under Chinese Communist Party rule to learn, develop and preserve their native languages is protected under China’s own constitution; Article 4, provides that “[e]thnic minorities’ right to learn, use and develop their own spoken and written languages is guaranteed in accordance with the law”. Article 35 states that “[c]itizens of the People’s Republic of China enjoy freedom of speech, of the press, of assembly, of association”, and minority languages are protected under a range of other laws and regulations. They are also protected in the International Covenant on Economic, Social and Cultural Rights, which your government ratified in 2001, most specifically in Article 13 on the right to education and Article 15, which protects the right to “take part in cultural life”.

Furthermore the United Nations Sustainable Development Goals, adopted by all Member States in 2015, call for a strong and binding commitment to inclusive and equitable quality education for all, as well as a reduction in inequality within and among countries and the promotion of peaceful and inclusive societies, the provision of access to justice for all.

Despite these agreements and protections, Tibetans continue to have their language rights systematically violated, as Chinese authorities increasingly marginalize the Tibetan language. The mother tongue of the Tibetan people is predominantly absent from numerous aspects of day to day life, including in local governance, the judicial system and educational institutions, and learning in the Tibetan language has been removed from the curriculum in schools posing serious risks to the rich tapestry of Tibet’s unique culture, and fundamentally undermining the human rights of the Tibetan people.

Perhaps most damagingly, your government has overseen a policy of prohibiting Tibet’s monasteries from providing Tibetan language instruction to the surrounding communities.Tibet’s monasteries have historically played a key role in providing children with both a religious and secular education. The policy of shutting down these language classes risks causing irreparable damage to the Tibetan language and has been met with dismay and frustration by Tibetans who see their culture being eroded.

Among them is Tibetan shopkeeper Tashi Wangchuk, who has been in detention since 2016 and is currently serving a five year prison sentence for “inciting separatism” despite the fact that he has committed no crime. In 2015, Tashi Wangchuk attempted to file a lawsuit in Beijing to ensure that local authorities guarantee the provision of Tibetan language education. Tashi began voicing concern publicly about the lack of Tibetan-language education after the authorities in Kyegundo stopped local monasteries and a private school in the area from teaching Tibetan to laypeople.

In 2015, Tashi gave an interview to The New York Times about his attempts to promote the teaching of Tibetan. His efforts to persuade the Chinese government to guarantee Tibetan language instruction were conducted through official channels and he made it clear that he was not advocating Tibetan independence. Instead, his focus was ending the destruction of Tibetan language and culture.

Despite taking these precautions, Tashi Wangchuk was arrested on 27 January 2016, held in an unknown location, tortured and later charged with inciting separatism. It took a full two years for him to stand trial and, when he finally did, it was in a closed session, to which journalists and visiting diplomats were denied access.

The appalling treatment of Tashi Wangchuk demands immediate action. As organisations dedicated to freedom of expression and human rights, we join the calls from around the world, from the United Nations and many of your trading partners, including the United States and the European Union, urging you to immediately and unconditionally release Tashi Wangchuk.

Wider action is also required to redress the harm done to the Tibetan language. We call on you to comply with international law and the Chinese Constitution and reverse the effective ban on the teaching of Tibetan. If the Chinese Communist Party’s stated commitment to minority rights is to be taken seriously, Tibetans must be allowed to learn and promote their language and be able to use it in their day to day lives.

We call on you to ensure that he Chinese government complies with its international obligations to respect the cultural and linguistic rights rights of the Tibetan people, and demand the immediate and unconditional release of Tashi Wangchuk.

Students for a Free Tibet – https://studentsforafreetibet.org/