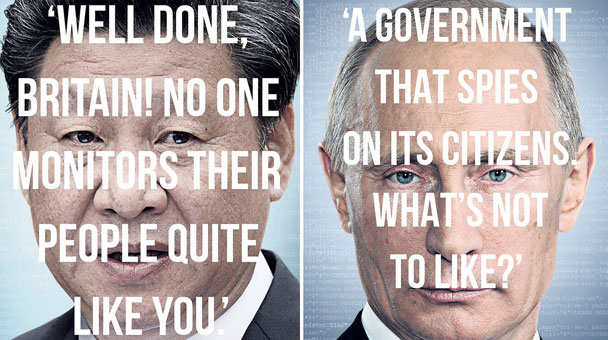 The Don’t Spy On Us coalition (of which English PEN is an executive member) today launches a provocative new advert alerting the public to the dangers of Theresa May’s proposed new surveillance powers.

The billboard advert, satirically depicting some of the world’s most notorious leaders pledging their support for the UK government’s Investigatory Powers Bill, will be displayed at major junctions in London from 10 May, with print and online adverts launched simultaneously

The unprecedented coalition of civil liberties organisations believes the Investigatory Powers Bill, currently going through parliament, will make the UK a world leader in surveillance and inspire tyrants like Vladimir Putin and Robert Mugabe.

The legislation would grant government agencies powers to spy on innocent British people, powers campaigners say have no place in a democracy.

“The UK government should be leading the way in guaranteeing safe and secure communications for everyone,” says Eric King, director of Don’t Spy On Us. “Instead it is providing examples for dictators and across the world.

“When China introduced controversial sweeping surveillance powers just a few months ago its government claimed it was doing ‘basically the same as what other major countries in the world do.’ Oppressive regimes are already following our lead.”

The Investigatory Powers Bill will:

Join the Don’t Spy On Us campaign