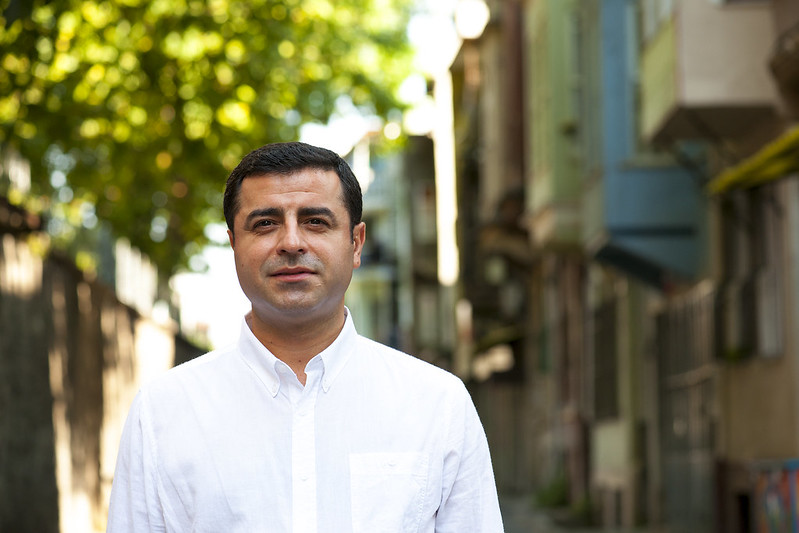 Literature – the art form that arguably comprises the backbone of any culture – not only remains at the vanguard of critical thinking but also serves as a catalyst for the thoughts and feelings that in turn create political change.

From the preface to Dawn, translated by Amy Spangler and Kate Ferguson (Hogarth Press, 2019)

Writer and former co-chair of the Peoples’ Democratic Party (HDP), a pro-Kurdish rights opposition party in Turkey, Selahattin Demirtaş has been held in pre-trial detention in Turkey since 4 November 2016.

His arrest and detention on dubious terrorism charges came after a controversial temporary constitutional amendment that lifted HDP deputies’ parliamentary immunity, including Demirtaş’s. The evidence used against him consists largely of his political speeches and press statements and lacks any compelling evidence of criminal activity.

The Turkish authorities have so far failed to implement the European Court of Human Rights judgments from 2018 and 2020, which found that the detention of Demirtaş pursued the ‘ulterior purpose of stifling pluralism and limiting freedom of political debate’ and ordered his immediate release.

Selahattin Demirtaş’s case is emblematic of the harassment, threats, and persecution that critical voices have been facing in Turkey, particularly since the coup attempt of July 2016 and the breakdown of the rule of law that followed.

While in prison Selahattin Demirtaş wrote a collection of short stories entitled Seher (Dawn), which instantly became a best-seller and was translated into scores of languages. Most notably, its English translation by Amy Spangler and Kate Ferguson (Hogarth Press, 2019) won an English PEN PEN Translates award. His latest book Devran was published in 2019 in Turkey.

Join us in sending him messages of support and solidarity via our form below. If you would like to write and post a letter, please contact us for more information.

Selahattin Demirtaş was initially arrested and detained in Turkey on 4 November 2016 on charges of being a leading member of a terrorist organisation, spreading terrorist propaganda, praising crimes and criminals, and inciting violence.

The first European Court of Human Rights judgment in the Demirtaş case, delivered on 20 November 2018, found his pre-trial detention unlawful and ordered his immediate release. However, Demirtaş was not released from detention, but instead sentenced to four years and eight months in prison in a separate case, for alleged terrorist propaganda during a speech he delivered in 2013. Shortly before the Grand Chamber hearing, Demirtaş’s release from pre-trial detention was ordered, but he remained in prison due to this separate case.

On 20 September 2019, when the possibility of his release arose due to the deduction of his imprisonment period from the final conviction term, new terrorism charges were brought against him and he remained in prison. On 7 January 2021, a Turkish penal court approved the indictment against Demirtaş in this new case. He faces a life sentence without parole. On 25 May 2021, this case, known as the Kobane trial, was merged with his main trial which was the basis of his initial pre-trial detention .

The basis of Demirtaş’s current pre-trial detention was considered as a ‘new legal classification’ of the same acts and incidents that formed part of the grounds relied on to justify his initial pre-trial detention until 2 September 2019 by the Grand Chamber of the European Court of Human Rights in its judgments dated 22 December 2020.

The Turkish authorities have so far failed to implement the European Court of Human Rights judgments and the Committee of Ministers decision from March 2021, urging Turkey to implement the Court’s rulings, and to free Demirtaş.

On 7 June 2021, the Chief Public Prosecutor of the Court of Cassation refiled a closure case before the Constitutional Court, which was initially sent back from the Constitutional Court in March on procedural grounds, demanding that HDP be dissolved and nearly 500 party members – including Demirtaş – be banned from engaging in politics for five years.