Send a message of support and solidarity to Writers in Myanmar.

In the wake of the military coup in February 2021, millions of people across Myanmar have taken to the streets in protest. Writers and artists have been at the vanguard of these demonstrations and are among the many people who have been targeted, detained, tortured, and in some cases killed, simply for exercising their right to peaceful protest, for calling for an end to military dictatorship.

Following the coup, our sister centre PEN Myanmar was forced to suspend their plans and activities for safety reasons. Nevertheless, writers across Myanmar have remained at the forefront of protests. Many of them, including several members of PEN Myanmar, are among those to have been detained in the months since. Tragically, four poets – Khet Thi, K Za Win, Myint Myint Zin, and U Sein Win – are among the hundreds of unarmed civilians to have been killed. Meanwhile, many others have been forced into hiding, or to seek refuge abroad.

This time the determination to eliminate military dictatorship by the people of Myanmar is incredibly strong. Writers and poets simply join the revolution not only through their words but also through their walks on the march. Bullets hit heads of people but couldn't shake their determination and commitment to revolution. But words from hearts of writers & poets and flowers on heads of both men and women obviously hit and shook the cruel security forces very hard. Words won't die though writers might do. 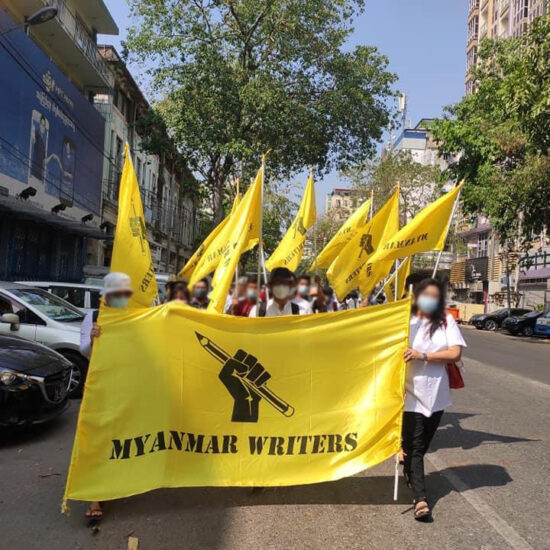 ‘Even if I only have one minute left to survive,
I wish it to be free of any guilt.’

PEN Myanmar was founded in 2013 to defend freedom of expression and foster vital literary culture in the country. Speaking at the formal establishment of the centre during the 2013 PEN International congress, one of the founding members said:

PEN Myanmar is our dream. In the bitter past, we had to be the object – just accepting the others’ support. For the brighter future, we want to be the subject that can support and help the victims around the world.

In the years since, PEN Myanmar have delivered an extensive programme of literary performances, educational work, and a quarterly freedom of expression bulletin. They have also hosted advocacy workshops with parliamentarians, members of regional governments, and high-ranking civil servants, and produced a yearly ‘scorecard’ on the situation of freedom of expression.

Following the military coup in February 2021, PEN Myanmar has been forced to suspend their plans and activities for safety reasons. In their last public statement, PEN Myanmar joined other groups in calling on the international community, and the artistic community in particular, to stand with them:

We know that the situation must ultimately be solved by the people of Myanmar. But we call on the international community to do what they can to support us in our fight for democracy. As creative professionals from Myanmar, we call on our creative brothers and sisters across the world, and from all artistic communities, to stand up and show solidarity with us in our struggle and support those in need!