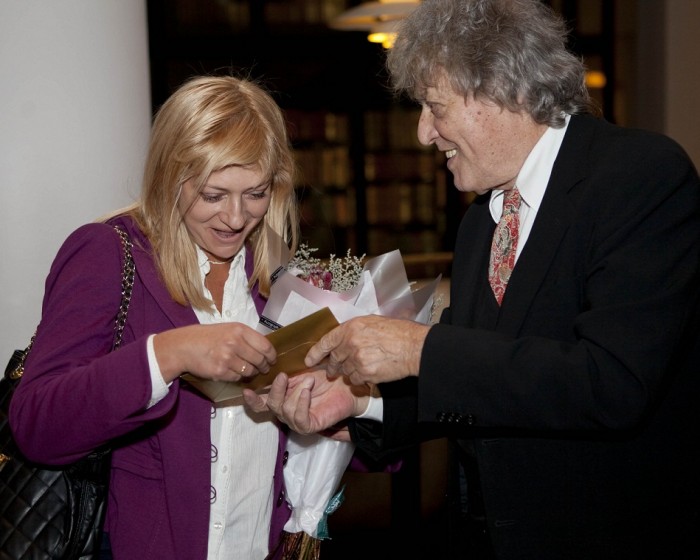 Last night, Belarusian journalist Iryna Khalip was announced as the International Writer of Courage who will share the 2013 PEN/Pinter Prize with playwright Sir Tom Stoppard. In her acceptance speech, she thanks both Tom and PEN for their invaluable support in recent years.

I have to start my short speech with the name of Anna Politkovskaya. Seven years ago this day she was killed. She was a courageous journalist, a person who cared and my colleague.

It is a great honour for me to be here and get this remarkable prize from Tom Stoppard. I would like to thank English PEN and Tom but what I want to say is that you did a lot more for me.

When I was in prison and then under house arrest and was held incommunicado I didn’t know that hundreds of letters and postcards in support and solidarity were mailed to me. Only later I read them all, a big pile of letters almost all of which began with the words: «I learned from English PEN that you are under house arrest. I want you to know that we are here in England express our solidarity and pray for you». Some people sent me books and always there was a postcard mentioning English PEN. I don’t know what it was — an action or a part of a campaign to support writers in prison… I know for sure that when I got a suspended two-year sentence and my husband got five year term in prison, our son was only four at that time, those letters and postcards post-stamped in Great Britain helped me a lot. I still keep these letters and will keep them forever. And the gratitude to the English PEN will forever be in my heart.

I also remember one particular evening under house arrest. Try to imagine a room with me, my little son and two KGB officers watching us 24 hours a day. I’m not allowed to work, write letters, have any contacts with the outside world. So we are looking at old photos with my son, I don’t want him to forget how his dad looks. I take one of the pictures and feel breathless. It’s an amateur picture from 2005 made in the same room. There is Tom Stoppard in this picture with his permanent cigarette and we and our friends are also there. I look at the picture and realize that out of those who are in it only Tom is free. Oleg Bebenin is dead, murdered three months before our arrest. My husband Andrei Sannikov and our friend Dmitri Bondarenko are in prison. Nikolai Khalezin and Natalia Kaliada, our friends and directors of Belarus Free Theatre at the invitation of which Tom came to Minsk that autumn, had to flee the country to avoid prison. It was painful to look at the photo. I understood that those from the picture who survived would never be the same. Somebody may not survive. Only Tom with his cigarette was the same. And I dreamed and wished that nothing happened to him because he, in the centre of that photo, gave hope that there could be changes. Those who survived would come back home. Those who died would rest in peace.

Some days after I found that photo Tom managed to send me a note of support through some magic channels. And I understood that I was not left one on one with the absolute evil. Tom Stoppard is stronger than the absolute evil.

Then the mail restrictions were lifted and all those hundreds of letters were pouring from Great Britain. You cannot imagine how much it helped me to solve very simple and most difficult problems: to survive, to withstand and to stand strong.

Thank you friends. Thank you Tom.