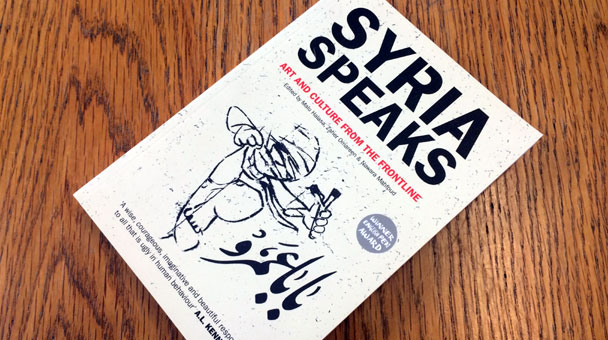 As reported in the Herald today, Faizah Shaheen is considering taking legal action against Thomson Airways following her detention under Schedule 7 of the Terrorism Act in July.

Cabin crew had reported Ms Shaheen to the police after observing her reading Syria Speaks, an acclaimed anthology of writing by Syrian artists and writers, which received an award from English PEN, during her honeymoon flight to Turkey. On her return to the UK, the police detained her and questioned her for 30 minutes.

The airline has so far failed to apologise to Ms Shaheen or given an explanation for why she was reported.

In a complaint to the airline on 2 September, Ms Shaheen described the lasting distress she has experienced as a result of the incident. She noted that the book was described as a ‘Syrian phrasebook’ to the police: ‘Not only does this description show a shocking amount of ignorance in the sense that “Syrian” is not a language. It also demonstrates that [the member of the cabin crew] was drawing conclusions based on no evidence.’

Ms Shaheen has asked for an apology and compensation. ‘The training around what is considered to be suspicious behaviour needs to be improved and where terrorism is concerned to keep a sense of proportion before condoning this kind of behaviour.’

In its response to Ms Shaheen, the airline made no apology or recognition that the cabin crew member had acted inappropriately, stating: ‘Our crew…. are encouraged to be vigilant and share any information or questions they have with the relevant authorities, who would then act as they see appropriate.’

‘Faizah Shaheen’s disturbing experience demonstrates the necessity of effective training for cabin crew on airlines,’ said Jo Glanville, director of English PEN. ‘Thomson’s inadequate response will ensure that such an error of judgment is likely to happen again, causing distress to passengers and wasting police time.

‘Reading a book should never be grounds for suspicion of criminal behaviour. Being questioned by police because of your reading material is a scenario one would expect to see in a totalitarian state. I would recommend that Thomson Airways buys a copy of Syria Speaks for everyone of their cabin crew as an essential part of their training and compensate Faizah Shaheen for the embarrassment and distress caused.’