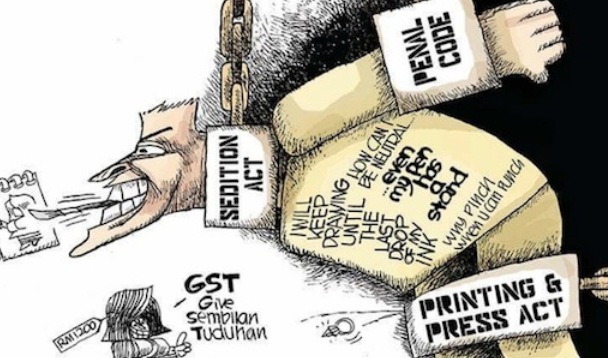 Last week, English PEN had the honour of meeting Malaysian cartoonist Zulkiflee Anwar Haque ‘Zunar’.  Zunar is currently facing nine charges under Malaysia’s Sedition Act, and his trial is due to begin in Malaysia today, 20 May 2015. If convicted, could face up to 43 years imprisonment.

English PEN has therefore joined with our colleagues ARTICLE 19, Index on Censorship, Media Legal Defence Initiative, and PEN International in calling for all charges against the cartoonist to be dropped immediately and unconditionally. The full text of our open letter to Prime Minister Najib of Malaysia follows.

We, the undersigned international organisations, urge the Malaysian authorities to drop charges against cartoonist Zulkiflee Anwar Haque “Zunar”, who is currently facing a record-breaking nine charges under the Sedition Act for comments made on the social media network Twitter, for which – if convicted – he could face up to 43 years in prison.

Freedom of expression is an essential part of any democratic society and the Malaysian authorities must protect this right for all, including those who are critical of government. Rather than safeguard this right, the authorities have intensified their crackdown on journalists, writers, activists, students, academics and artists. We, the undersigned international organisations, condemn these violations and urge the international community to support Zunar and everyone in Malaysia to speak freely in accordance with the Universal Declaration of Human Rights.