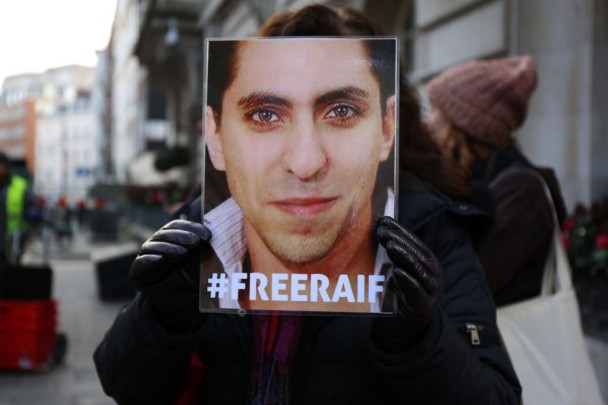 Saudi blogger and activist Raif Badawi will share the 2015 PEN Pinter Prize with British poet, journalist and literary critic James Fenton. Badawi was named the 2015 International Writer of Courage, selected by Fenton from a shortlist of international cases of concern supported by English PEN, during a public event held this evening at the British Library in London.

Fenton – who was announced as the 2015 PEN Pinter Prize winner in June – highlighted Badawi’s courage during his address at the British Library:

What moved me was the contrast between the simplicity of Badawi’s liberal aims –their modesty, almost – and the ferocity of the punishments they have brought down on him. Imprisonment, astonishing fines, corporal punishment designed to break either the spirit or the body first and to act as a chill warning to others. It is a world of inconceivable cruelty, but intimately linked to ours by business, strategic interests, military and diplomatic ties. For our part, then, protest has a purpose and – who knows? – perhaps even a chance of some sort of success.

Raif Badawi has been a case of concern to English PEN since he was first imprisoned in Jeddah, Saudi Arabia, in 2012. In May 2014, he received a fine of 1 million riyals (£175,000), a tenyear prison sentence and was sentenced to 1,000 lashes. Charges against him include ‘violating Islamic values and propagating liberal thought’.

The public flogging of Badawi, on 9 January 2015, sparked global outrage. Since then the campaign for his case, spearheaded by his wife Ensaf Haidar, has gathered international support and led to condemnation of the Saudi government. An anthology of his writings, 1000 Lashes: Because I Say What I Think, was published in the UK this September (Greystone Books) with all proceeds being donated to his family to aid their efforts for his release.

In a filmed statement shown at the event Badawi’s wife, Ensaf Haidar, thanked English PEN for the award:

‘I speak to you today from Quebec, my heart and mind dominated by one concern – to defend my husband, Raif Badawi, who is in his third year in prison solely for exercising his right to express himself. Raif is just a peace-loving intellectual who was not content to be part of the flock or to follow men of religion who are out of touch with the real world and who rule through laws that are unjust and despotic. He was brave enough to speak out and say no to their brutality and oppression, and their only response was to punish his frail body with the whips of their ignorance. The fifty lashes he received have been enough to ignite massive protests that have still not subsided. From Korea to Australia and the farthest reaches of Canada, people of all kinds have cried, “I am Raif”.

‘I am honoured to accept the PEN Pinter Prize from English PEN, and I would like to thank the British poet James Fenton for choosing Raif as his co-winner, as 2015 International Writer of Courage.’

Jimmy Wales, co-founder of Wikipedia and campaigner for Raif Badawi through the Jimmy Wales Foundation, accepted the award at the British Library on behalf of the family. He commented:

Raif Badawi used words to fight for a change. His non-violent campaign for a better future to his country encountered an exceptionally violent response by the Saudi government. Raif should have been honoured for founding a website that allowed healthy public discourse in Saudi Arabia; he should not have been held behind bars, facing flogging. This injustice must be corrected. I am honoured to accept the PEN award on behalf of Raif and deeply regret that he is unable to personally accept it himself.

The exceptional bravery and endurance of Raif Badawi have aroused the admiration of the free-thinking world: he is the most worthy nominee as PEN’s International Writer of Courage.

James Fenton officially accepted the 2015 PEN Pinter Prize from Antonia Fraser at the event. He delivered a lecture written for the occasion, which was published in a limited edition by Faber & Faber and presented to members of the audience. Fellow writer and friend Julian Barnes introduced Fenton with an appreciation of his work.

When Raif Badawi says what he thinks, he and his family pay a terrible price. But we who campaign for him cherish the thoughts he has shared with us, and we hope that this prize will help to secure his freedom.

A special vigil will be held for Raif Badawi outside the Saudi Embassy at 9am on Friday 9 October, nine months after he was first flogged. PEN has been holding regular vigils since Badawi’s first flogging in January 2015.