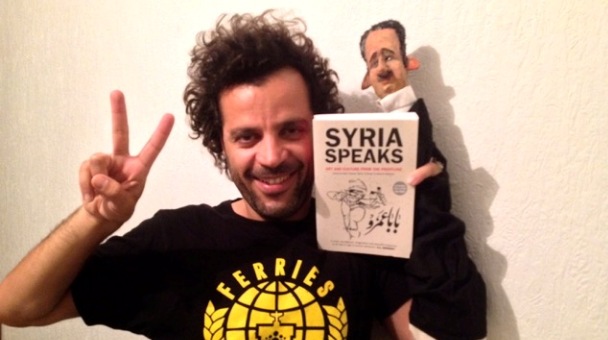 On 25 July, British NHS worker Faizah Shaheen was detained under Schedule 7 of the Terrorism Act, following suspicions about the book she was reading. The book in question was Syria Speaks, an extraordinary anthology of Syrian art and culture from the frontline and a PEN-supported title, published by Saqi Books in 2014.

The incident is chilling on many fronts. The freedom to read should be without bounds. Our thirst for knowledge, entertainment, information, education and diversion should allow us to explore any kind of literature, no matter how trivial, offensive or shocking. That’s our private business, and it’s a freedom that’s fundamental to our liberty. What you’re reading should be no concern of the police.

She concluded by calling on readers to show their solidarity with Shaheen, and with the artists and writers whose work features in the book, stating:

If you want to protest, start buying a copy of Syria Speaks – and reading it in public.

We’re delighted to see that people seem to be doing exactly that. In the days since, sales of Syria Speaks have soared, while Saqi has ordered a reprint to cope with the increased demand. Lynn Gaspard, Saqi’s manager director, told the Guardian:

The story went viral [and] it was quite frantic last week. Demand for the book, which showcases the work of more than 50 artists and writers, shot up when Shaheen spoke out about what had happened to her. It climbed to around 300th place in Amazon’s charts, and Saqi has now put through a reprint of 1,000 copies. The publisher has also shipped in 450 copies of the book from the US, and 30 from Beirut. According to sales monitor Nielsen BookScan, it was selling between one and five copies a week in previous months.

We had to bring over all these copies because we’d sold out by last Friday afternoon. I’m so glad people are still reading this book two years on, although I feel so sorry for Faizah … It’s absolutely horrific what happened to her. I totally understand that we need to be vigilant and careful, and that there is a real problem, but come on, people.

Please continue to show your support by buying, reading and sharing Syria Speaks. Copies in both English and Arabic are once again available directly from Al Saqi Books, our friends at Foyles, and your local library.

Send us your photos

Are you among one of the many people to have bought a copy of Syria Speaks? If so, please consider sending us a photo of you with your copy – ideally in public, and on some form of public transport if possible!

Send us your photos via Twitter with the hashtag #SyriaSpeaks and tagging @englishpen and @SaqiBooks, or email them to [email protected] It would also be great if you could let us know where the photos were taken if possible.

Are you among the many people to have bought a copy of #SyriaSpeaks this week? Send us your photos if so! @SaqiBooks pic.twitter.com/YG4tCQKYOS

** Following last week’s events, a contributor to Syria Speaks, Robin Yassin-Kassab, who inspired Shaheen to read the book, will be appearing at a free event, Poetry as Refuge, at the Edinburgh International Book Festival on 18 August. More details here **