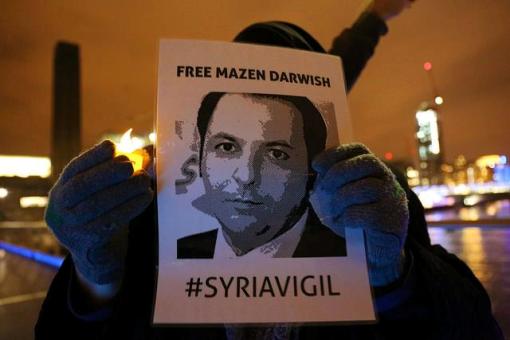 Arrested in February 2012, Mazen Darwish, the founding president of the Syrian Centre for Media and Freedom of Expresssion (SCM), and his colleagues Hani Al-Zitani and Hussein Gharir were held without trial for over two years. In March 2014 they were finally charged with ‘publicising terrorist acts’ under Article 8 of the 2012 Anti-Terrorism Law.

More than a year later, they have yet to be tried on these charges. Their hearings have been subjected to repeated delays, most recently on 25 March. We were therefore relieved to learn from Yara Bader, the current director of the SCM and Mazen’s wife, that their next hearing has now been scheduled to take place on 15 April.

We urge the authorities to ensure that next week’s hearing goes ahead as planned, and continue to call for the immediate and unconditional release of Mazen Darwish, Hani Al-Zitani and Hussein Gharir.

Meanwhile, we welcome the fact that Mazen Darwish’s courage and commitment to freedom of expression continue to be widely recognised. In March 2015, Yara Bader travelled to Myanmar to collect the IPI World Press Freedom Hero Award on Mazen’s behalf. He has since been announced as the winner of the prestigious 2015 UNESCO/Guillermo Cano World Press Freedom Prize.

UPDATE – 16/04/15: The hearing has been postponed yet again and is now expected to take place on 28 April 2015. Please continue to call for the immediate release of Mazen Darwish, Hani al-Zitani and Hussein Gharir.