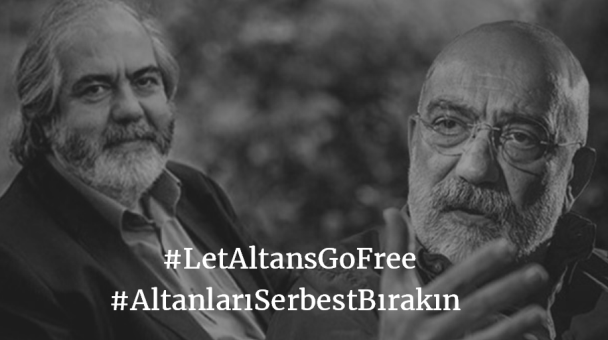 It has been a particular year of crisis for freedom of expression in Turkey, where the government has targeted the independent media since the failed coup in July, detaining, arresting and prosecuting journalists, writers and academics.

Five months on from the attempted coup in Turkey there are now almost 150 writers and journalists in prison, victims of a continuing campaign to silence peaceful and legitimate opposition. These include the leading linguist Necmiye Alpay, who recently spent her 70th birthday in detention, and her co-defendant, renowned novelist and PEN member Aslı Erdoğan. Detained a month after the coup, in August 2016, Alpay and Erdoğan are now due to stand trial on 29 December on charges of ‘membership of a terrorist organisation’.

Meanwhile fellow writer Ahmet Altan, whom English PEN hosted in London for the launch of his novel  Endgame last year, continues to languish in maximum security Silivri prison, alongside his brother, the academic Mehmet Altan. Also facing terror charges, the brothers cannot receive books, letters or any written notes from the outside world, nor are they allowed to access the prison library. These are just four examples of the many writers PEN believes to have been detained in violation of their right to freedom of expression in the wake of the coup.

On 10 December, representatives from human right organisations including PEN International and the International Press Institute intended to mark International Human Rights Day with a vigil outside Silivri prison where many of our colleagues are being held. However, the authorities prevented them from doing so – declaring the protest to be illegal and sealing off roads to the prison – and the vigil had to be held in town instead.

On 13 December, Caroline Stockford of Wales PEN Cymru attended the trial of 21-year-old Evrensel Daily reporter Cemil Uğur on behalf of PEN colleagues around the world. Initially detained in August 2016, along with fellow reporter Halil İbrahim Polat, they were released on bail after 16 days in detention, during which time they were reportedly subjected to insults and death threats. However, in October 2016, while attending a police station to request permission to leave the province as required under an imposed travel ban, Uğur was informed that a warrant for his arrest in relation to this case was pending and was immediately arrested. Shortly before the hearing on 13 December, PEN learned that Uğur’s lawyer Tugay Bek had also been detained and that a fellow international observer from the NUJ had had their visa to attend rejected. In light of this, we were particularly relieved to hear that Uğur has now been released on probation, although he remains subject to a travel ban and will face another hearing in March 2017.

As 2016 draws to a close, PEN will be continuing to call for the release of our imprisoned colleagues and to do what we can to support them. Please join us.

Many of our detained colleagues in Turkey are among the writers at risk PEN is encouraging supporters to write to as part of our annual Season’s Greetings initiative. Participants are encouraged to share photos of their messages with the hashtags #PENgreetings and #yazarimadokunma (don’t touch my author). More information here.

There is also an ongoing ‘open letter’ campaign in support of imprisoned writers Ahmet and Mehmet Altan. Letters can be sent to [email protected] (please cc [email protected]) You can view the letters sent so far on this dedicated website: ahmetaltanmehmetaltan.com

There are a number of petitions being circulated in support of writers at risk in Turkey:

Write to the Turkish authorities

Please copy your appeals to the Embassy of Turkey in your country and send us copies of your letters or information about other activities and of any responses received.