Turkey: freedom of expression in jeopardy 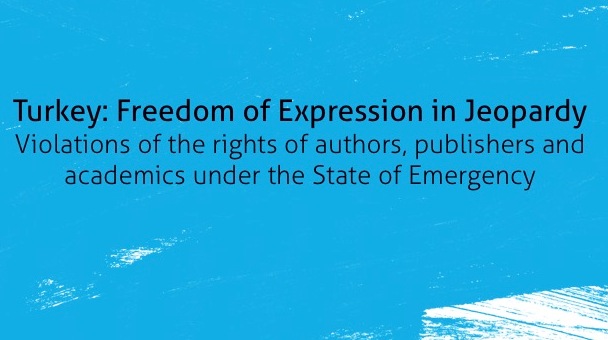 English PEN are proud to launch our latest report ‘Turkey: freedom of expression in jeopardy. Violations of the rights of authors, publishers and academics under the State of Emergency’.

Researched and written by leading experts in the field and internationally recognised advocates for freedom of expression in Turkey, Dr Yaman Akdeniz (professor of law, Istanbul Bilgi University) and Dr Kerem Altiparmak (assistant professor of law at Ankara University), the report examines the impact of the Turkish government’s response to the failed coup on the publishing community and academia.

Dr Akdeniz joined Maureen Freely, Chair of Trustees, English PEN in London for the launch of the report, in partnership with the Turkish Publishers Association.

This report, written for English PEN by academics Yaman Akdeniz & Kerem Altıparmak, presents an overview of the current situation of freedom of expression in Turkey and engages in a critical evaluation of violations of rights against writers, publishers, academics and academic institutions.

Prior to the failed coup attempt in July 2016, criminal investigations and prosecutions were frequently used to silence dissent along with other restrictive measures. While addressing the historical suppression of freedom of expression in Turkey, the report focuses on the effects of the State of Emergency introduced in the wake of the coup and the silencing and chilling effect that this has had on many writers, publishers and academics in both their professional and private lives.

The state of freedom of expression in Turkey

Turkey has always been one of the most restrictive countries among Council of Europe member states in terms of media freedom and freedom of expression:

Suppression of freedom of expression

Physical attacks and torture, rife in the 1980s and 1990s, have been replaced by a more subtle approach in recent times, one which has been described as ‘less brutal but more effective’.

These issues have been compounded in the wake of the attempted coup and recourse to anti-terrorism legislation in particular has become even more pervasive. The increase in the number of people accused following the coup attempt is startling.

The judiciary has become much more politicised, reducing the role and effectiveness of the legal system as a protector of freedom of expression. Although the independence of the judiciary has been in question for some time, and particularly following the Gezi Park protests of 2013, the situation has become more serious in the wake of the failed coup attempt of 15 July 2016.

After 2017, judiciary independence was further eroded by changes made to appointments to the new Council of Judges and Prosecutors which have meant that, in one way or another, all of its members are chosen by the government. As a result, the ability of judges to pass independent judgements is highly questionable.

The State of Emergency

The State of Emergency measures introduced in 2016 can be examined under two general categories:

As a result of emergency decrees:

Violations against writers and publishers

The rise of criminal cases involving freedom of expression inevitably has direct consequences for writers and publishers. The research conducted produced a list of 80 writers. Of the 80 authors listed in this report, only three are being tried for the books they have written. A large majority of the remaining 77 authors are being prosecuted for being a member of a terrorist organisation or for having affiliations or links with such organisations due to their newspaper articles or social media posts.

There has been an even more alarming increase in the number of academics being dismissed from several universities.

Violations against writers and academics in light of constitutional safeguards

Both the Turkish Constitution and the European Convention on Human Rights incorporate safeguards for freedom of expression.  The actions outlined in this report at therefore arguably in contravention of:

It has not been possible to find solutions to such structural problems through individual applications to the ECtHR. Of the tens of thousands of cases involving freedom of expression, as shown by the statistical data, a couple of dozen judgments on freedom of expression issued each year by the ECtHR have no effect on government practices.

For this reason, unless mechanisms are developed and used to address the lack of political will which is the main obstacle in effectively applying the standards of freedom of expression, it will not be possible to solve the structural problems and create a free legal system for writers in Turkey.