UAE: open letter calling for release of Ahmed Mansoor on his 50th birthday 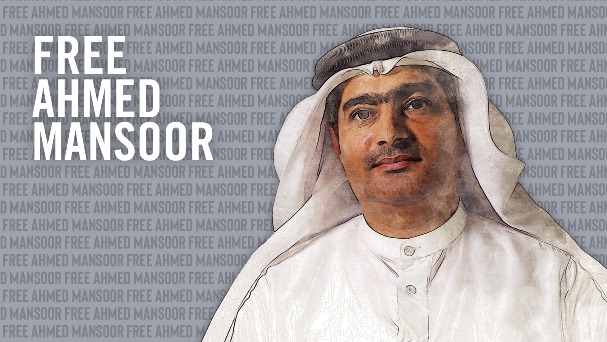 Read our joint open letter below and find out more about the campaign and how to get involved here.

The United Arab Emirates (UAE) has recently announced multiple projects promoting pluralism and tolerance both at home and abroad. 2019 has been declared the ‘Year of Tolerance’ and in 2020, Dubai will host the World Expo trade fair, under the theme ‘Connecting Minds, Creating the Future.’ Upon Dubai’s selection for this exhibition in 2013, Sheikh Mohammed bin Rashid Al-Maktoum, Vice President and Ruler of Dubai, said: ‘[w]e renew our promise to astonish the world in 2020.’ We welcome these public commitments to tolerance and open-mindedness.

It is in this same spirit that we, the undersigned, call upon the UAE government to immediately and unconditionally release human rights defender Ahmed Mansoor, whose life we believe may be at risk following beatings and hunger strikes to protest deplorable and inhumane prison conditions. The Authorities have convicted and imprisoned him solely for his human rights work and for exercising his right to freedom of expression, which is also protected under the UAE’s Constitution. Amnesty International considers him to be a prisoner of conscience.

Before his imprisonment, Mansoor was known as ‘the last human rights defender left in the UAE’ on account of his fearless work to document human rights violations in the country. His willingness to speak out publicly in defence of human rights on his blog, via social media and in interviews with international media was an example to us all. He is also an engineer, a poet, and a father of four. He is on the advisory boards of the Gulf Centre for Human Rights (GCHR) and Human Rights Watch and was awarded the 2015 Martin Ennals Award for Human Rights Defenders.

UAE authorities arrested Mansoor on 20 March 2017 at his home and subjected him to enforced and involuntary disappearance for over six months, with no access to a lawyer and sparse contact with his family, who did not know his exact whereabouts. The authorities held him in solitary confinement for prolonged periods of time.

Shortly after his arrest, a group of United Nations human rights experts said that the UAE should release him immediately, describing his arrest as ‘a direct attack on the legitimate work of human rights defenders in the UAE.’ They expressed fear that his arrest ‘may constitute an act of reprisal for his engagement with UN human rights mechanisms, for the views he expressed on social media, including Twitter.’

A year later, on 29 May 2018, Mansoor was sentenced under vague charges of ‘insulting the status and prestige of the UAE and its symbols, including its leaders’, ‘publishing false information to damage the UAE’s reputation abroad’ and ‘portraying the UAE as a lawless land.’ He received a sentence of 10 years in prison, a fine of 1,000,000 UAE Dirhams (US$272,000), three years of probation after completion of his sentence, and confiscation of his electronic devices. On 31 December 2018, the State Security Chamber of the Federal Supreme Court upheld his conviction and sentence.

The UAE’s Government actions against Mansoor have been widely criticised. For instance, on 4 October 2018, the European Parliament adopted a resolution condemning Mansoor’s ‘harassment, persecution and detention, and calling for his release.’ In May 2019, after he ended a month-long hunger strike to protest his unjust conviction and his detention conditions in Al-Sadr prison, a group of UN Special Rapporteurs stated that his conditions of detention ‘violate[d] basic international human rights standards and risk[ed] taking an irrevocable toll on Mr Mansoor’s health.’ In September 2019, Mansoor was severely beaten for continuing his protests and he undertook yet another hunger strike. Nevertheless, he continues to be held in an isolation cell with no running water or bed and is not permitted to leave his cell except for family visits.

It is a tragedy and a disgrace for the UAE that this Tuesday, on 22 October of the UAE’s ‘Year of Tolerance’, Ahmed Mansoor will turn 50, alone in a prison cell in such deplorable conditions, simply for exercising his fundamental right to free speech and for speaking out against human rights violations.

Mansoor’s imprisonment is part of a larger and growing pattern of repression in the UAE. Since 2011, the authorities have embarked on an unprecedented campaign of repression on freedom of expression, peaceful assembly and association in the country, shrinking the space for peaceful dissent to near-obliteration. Authorities have used privately manufactured technologies, such as those made by NSO Group, for the unlawful targeted surveillance of human rights defenders, including Mansoor, in order to monitor and clamp down on dissent. The authorities have arrested, detained, and prosecuted activists, human rights defenders and other critics of the government, including prominent lawyers, judges and academics, on broad and sweeping national security-related or cybercrime charges and in proceedings that fail to meet international fair trial standards.

The UAE has publicly declared itself a champion of tolerance in the Middle East and the world. Under the Universal Declaration of Human Rights, it has an obligation to protect the rights of its citizens and residents. For this reason, we call upon the UAE government to uphold these principles, and to release Ahmed Mansoor without further delay.