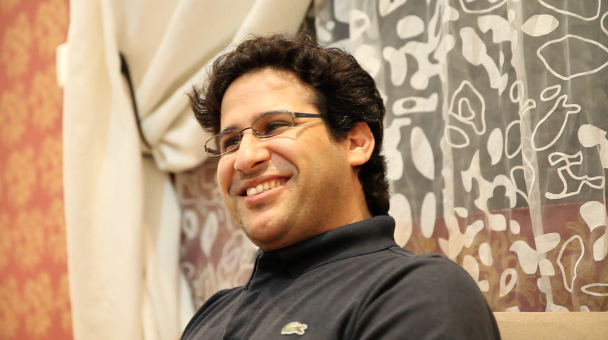 Lawyer and human rights activist Waleed Abulkhair has been named International Writer of Courage at the PEN Pinter Prize ceremony. The winner of the PEN Pinter Prize for 2018, Chimamanda Ngozi Adichie, made the announcement at the British Library this evening, Tuesday 9 October.

Currently serving a 15-year prison sentence, Abulkhair is a founding member of the Monitor of Human Rights in Saudi Arabia (MHRSA) and has written for local and international media. Abulkhair has also represented fellow activists and writers, including former PEN Pinter winner Raif Badawi, in court.

In addition to holding the Saudi Arabian government to account for human rights abuses, Abulkhair also provided salons for liberal youth to discuss new ideas, after laws around public gatherings were tightened to prevent ‘unbelief’ and ‘deviant thought’. Discussing politics, religion, culture and human rights, he named his salon ‘samood’, meaning ‘resistance’ or ‘steadfastness’. In response to his salons, a judge and several clerics voiced opposition to Abulkhair and demanded that death be the punishment for allowing guests to speaking openly about opposition to religious conservatism.

Tried in Saudi Arabia’s Specialised Criminal Court, Abulkhair was given a 15-year sentence (ten years executed and five years suspended), as well as a 15-year travel ban and a 200,000 Saudi Riyal fine for ‘undermining the regime and officials’, ‘inciting public opinion’ and ‘insulting the judiciary’ through his peaceful activism. Abulkhair refused to apologise in 2015 at the Court of Appeal, and declared he did not recognise the legitimacy of the Specialised Criminal Court. As a result, the judge tightened the sentence to 15 years executed.

More than four years later, Waleed Abulkhair remains imprisoned and reports suggest that he is being denied medication, books and post. Nevertheless, his voice still reaches far beyond the bars of his prison cell. As Abulkhair himself wrote in The Washington Post in 2012:

I am unable to leave this country, but the sun of humanity shines upon me every day. I bask in its rays, gaining strength against the darkness of oppression. My voice and the voices of others like me shall reach the world, no matter how hard they try to silence us. We shall say, consistently and proudly: steadfastness.

I am proud to share this year’s PEN Pinter Prize with activist, lawyer and writer Waleed Abulkhair.

I am deeply proud to share this prize with Waleed and I hope that this small act of solidarity will bring him some comfort, and will remind him that his struggle has not been forgotten, nor will it be in vain.

The judges said of Adichie:

In this age of the privatised, marketised self, Chimamanda Ngozi Adichie is the exception who defies the rule. In her gorgeous fictions, but just as much in her TED talks and essays, she refuses to be deterred or detained by the categories of others. Sophisticated beyond measure in her understanding of gender, race, and global inequality, she guides us through the revolving doors of identity politics, liberating us all.