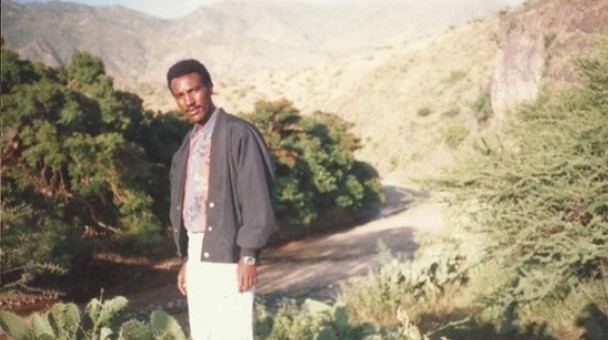 – Extract from Amanuel Asrat’s ‘The Scourge of War’, translated by Tedros Abraham

Award-winning Eritrean poet, critic and editor-in-chief of the leading newspaper ዘመን (Zemen, meaning The Times), Amanuel Asrat, was arrested at his home on the morning of 23 September 2001 amid a crackdown on state and private media. The limited information available suggests that Asrat is detained in the maximum security prison, Eiraeiro, north of Asmara.

In July 2001, the Eritrean government embarked upon a campaign to silence its critics, arresting opposition politicians, students and many journalists. Asrat and other editors of privately-owned newspapers were among those arrested as part of the crackdown: it is believed that 11 of these journalists are still detained.

More than fourteen years later, the situation of Asrat and the other prisoners is still unclear: it is unknown whether charges have been brought against them and even if any trial has taken place. There are severe health concerns as the detainees are believed to have been subjected to torture or other ill-treatment, including lack of access to medical care.

Amanual Asrat was among the recipients of a prestigious Oxfam Novib/PEN Award in January 2016. The Eritrean born Dutch journalist Habtom Yohannes accepted the prize on his behalf, reading a powerful poem written in tribute to Asrat.

English PEN will be continuing to campaign for Amanuel Asrat throughout 2016. He is among the international writers to be featured at the inaugural English PEN Modern Literature Festival in April 2016, for which he has been paired with poet and performer Andra Simons. He will also be among the poets highlighted as part of our Poetry as Protest initiative with Ledbury Poetry Festival in July 2016.

Share details of Amanuel Asrat’s case and examples of his writing on social media. #FreeAsrat

For International Translation Day 2015, PEN members from around the world translated ኣበሳ ኲናት (The Scourge of War) into fifteen languages from Afrikaans to Bangla, from Catalan to Occitan. If you would be interested in translating the poem into another language, please email [email protected] (NB the full list of existing translations is available here)

Write to the Eritrean authorities

Please copy appeals to the diplomatic representative for Eritrea in your country if possible. Details of some Eritrean embassies can be found here.