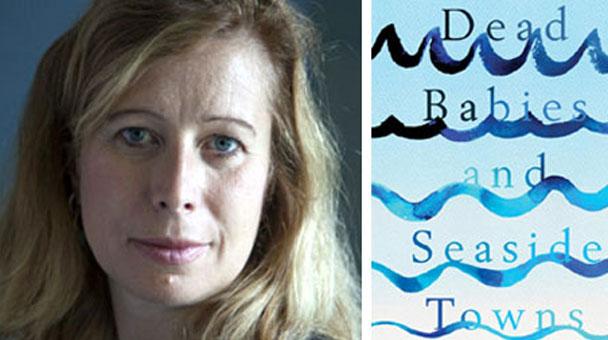 Alice Jolly has this evening been announced as the winner of the 2016 PEN Ackerley Prize for her memoir Dead Babies and Seaside Towns (Unbound).  The book chronicles the author and her husband’s quest for a baby after their second child was stillborn.

Accepting the cheque for £3,000 at a prizegiving event in London, Jolly said:

Unbound published this book when nobody else would … they stuck by this book all the way and believed in it when other people didn’t.

Jolly also thanked those who subscribed to the book

It isn’t just my book, [it’s the book for all those people] who had the nerve to come forward with their money to say ‘yes we believe in this book’ … People ask: ‘is crowdfunding a serious way to fund a book’? Well, clearly, it is a serious way to publish a book so I’m very pleased about that.

Finally, she paid tribute to those who have suffered the loss of a child:

Over the years I have had so many conversations with bereaved parents and I feel that this book belongs to all the people who, so tirelessly campaign on that issue and who, sadly, really really aren’t heard.

Two other books were shortlisted for the prize: Pour Me: A Life by AA Gill (Weidenfeld & Nicolson) and Kid Gloves: A Voyage Round My Father (Particular Books) by Adam Mars-Jones.

Although this year’s shortlist was indeed short – only three books –  it was also very strong. These three books stood out, not only because they are exceptionally well written but because they tell compelling stories that hold the reader’s attention throughout. It  was very difficult to decide between three such fine but very different books.

The PEN Ackerley Prize is the UK’s only literary prize dedicated to memoir and autobiography. It was established in memory of J R Ackerley, the author and literary editor. The prize is judged by the trustees of the J R Ackerley Trust: biographer and historian Peter Parker (chair), historian and biographer Richard Davenport-Hines, author Georgina Hammick, and writer and painter Colin Spencer. Previous winners have included Alan Bennett, Jenny Diski, Michael Frayn, Germaine Greer and Henry Marsh.