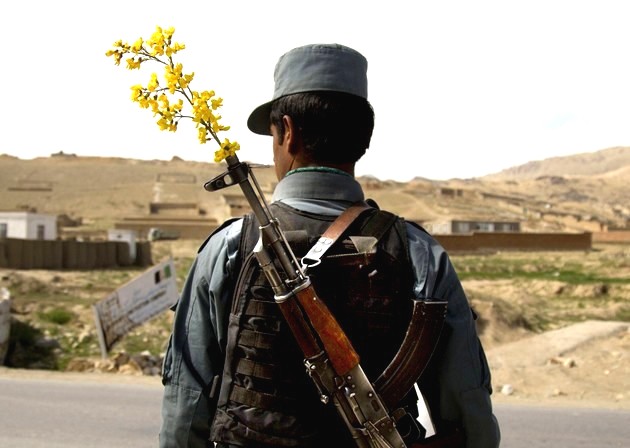 English PEN and Poetry International have come together to present Modern War Poetry – an event that offers the opportunity to hear personal accounts of conflict from a Middle Eastern perspective through poetry and discussion.

This event is one of three Poetry in Conflict themed talks taking place on Saturday 25 July. Each one aims to provide a fresh look at places that are constantly in the news because of conflict and challenge how these countries and regions are depicted in the media.

We’ll be joined by Syrian-Kurdish poet Golan Haji and Iraqi poet Adnan al-Sayegh who have been recording their experiences for future generations at great expense to themselves. Al-Sayegh’s uncompromising criticism of oppression and injustice, for example, has led to his being sentenced to death and forced into exile. The talk will be chaired by BBC Broadcaster Harriett Gilbert.

This event, the speakers and its topic inspired questions I hadn’t consciously asked myself before. What is modern war? What is the role of poetry within it? The more I’ve researched the idea of modern conflict, the more vast it has become. This blog offers a brief overview and exploration of the questions above.

What is Modern War?

When considering this question it’s worth noting the traditional definition of war (as defined by the online Oxford Dictionary): ‘a state of armed conflict between different countries or different groups within a country.’ This physical mode of war is of course still relevant and active today but alongside it we have metaphorical wars – the war on drugs, poverty and most notably, the so called ‘war on terror’. In the UK’s current ‘war on terror’ for example, there is the very real and yet abstract fight to protect young minds from radicalisation by ISIS. That is to say that being at war in the modern sense doesn’t necessarily mean fighting against another country but fighting against the harmful ideologies of individual groups, which surpass the physical. In short, modern war is not just physical; it can be metaphorical and abstract too.

Poetry as a form of human expression offers a perspective that news stories, articles and documentaries can’t provide. It rises from tragedy and despair as much as it does from love and beauty, if not even more so. In the context of war it offers insight, comfort, encourages empathy and gives voice to the voiceless.

This century the US and the UK have been involved in two modern wars: Afghanistan and Iraq. There have also been significant advances in technology, which have given us immediate access to information and the use of social media as a way of sharing and connecting with people from around the world. Nonetheless, from a personal point of view at least, it seems that the effects of these recent wars has been more impersonal than the first and second world wars. Conscription isn’t compulsory in the UK, we don’t ration in any sense of the word and there doesn’t seem to be a sense of continual collective sadness – rather peaks in emotion (and social media engagement), which calm as days go by.

Unless we are the relative or friend of someone who has fought in Iraq or Afghanistan, we don’t often think about what it would be like for someone we love to return from war suffering with Post Traumatic Stress Disorder, or not return at all. We watch the news, we know soldiers have been deployed, we hear the numbers of the fallen, but we are ultimately sheltered by the implications of war and don’t truly feel how devastating the situation really is. The seemingly desensitised delivery of tragic news seems to perpetuate this, along with the portrayal of war as a game, as used in advertising by The British Army.

I hadn’t read any 21st-century war poetry before I stumbled across Walking with the Wounded, which shares poetry from British soldiers. It is this poetry that I have shed tears for, that has educated me on the tragedy of modern warfare, not the media by which it is surrounded. In this day and age where empathy, compassion and offline human connection seems to be getting lost amidst the anonymity of technology, it is vital that we have the opportunity to read poetry that can offer insight into the life changing effects of war, on both a personal and universal level.

Finally, leading on from the theme of empathy and compassion, these are qualities we are becoming more and more reluctant to exercise when it comes to the Middle East. This is due to fear, fear of Islam and fear of attack, again, fuelled by elements of the Western media. Poetry offers us a bigger picture, the full story, as it were. It is the door to empathy and understanding; it is a bridge by which we can cross to hear the perspectives of victims of conflict away from home.

Dissident voices such as those of Haji and al-Sayegh (find examples of their poetry by clicking their names), who have used poetry as a way of speaking out against the oppression and injustice in both Iraq and Syria, have been punished for doing so. But it is when you are forced into silence that expression is most important. We must listen to these voices to give balance to what we hear on the news and so that we can start forming healthier and more compassionate views of regions and people we are unfamiliar with.

Join us in conversation with modern war poets Golan Haji and Adnan al-Sayegh to hear their experiences of war and conflict. BBC broadcaster Harriett Gilbert will be chairing the talk.