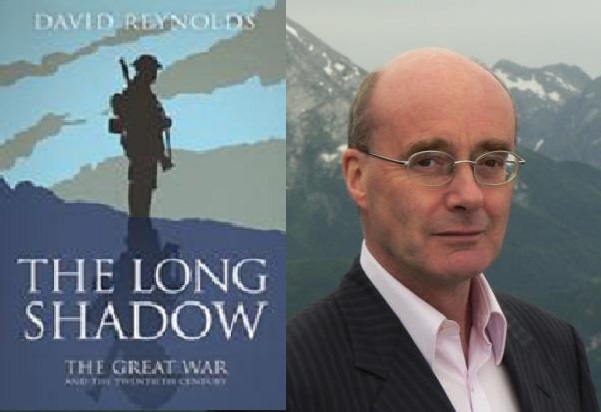 This anniversary year brought strong competition for WWI books, from straight forward histories to fascinating insights on little known aspects of the Great War and its aftermath.

Chair Anne Chisholm, also the Chair of the Royal Society of Literature, said: “If you only read one book about the First World War in this anniversary year, read The Long Shadow. David Reynolds writes superbly and his analysis is compelling and original.”

In The Long Shadow: The Great War and the Twentieth Century David Reynolds seeks to re-address our overriding sense of the First World War as a futile bloodbath. Exploring major themes such as democracy and empire, nationalism and capitalism and re-examining the differing impacts of the War on Britain, Ireland and the United States, The Long Shadow throws light on the whole of the last century and demonstrates that 1914-18 is a conflict that Britain, more than any other nation, is still struggling to comprehend. Stunningly broad in its historical perspective, The Long Shadow is a scholarly, thoughtful and seismic re-presentation of the Great War.

David Reynolds is Professor of International History and a Fellow of Christ’s College. His visiting positions include posts at Harvard, Nihon University in Tokyo and Sciences Po in Paris. He was elected a Fellow of the British Academy in 2005 and a member of the Society of American Historians in 2011. The Long Shadow will be a major 4-part BBC series in 2014.

The highly commended 2014 shortlist was:

The PEN Hessell-Tiltman 2013-14 Prize for History will be presented on Thursday 10 April, 4pm on the PEN Literary Salon at London Book Fair, Earls Court.

The Hessell-Tiltman prize of £2,000 is awarded annually for a non-fiction book of specifically historical content. Entrants, which may include first British translations, are to be books of high literary merit – that is, not primarily written for the academic market – and can cover all historical periods up to and including the end of the 1960s.