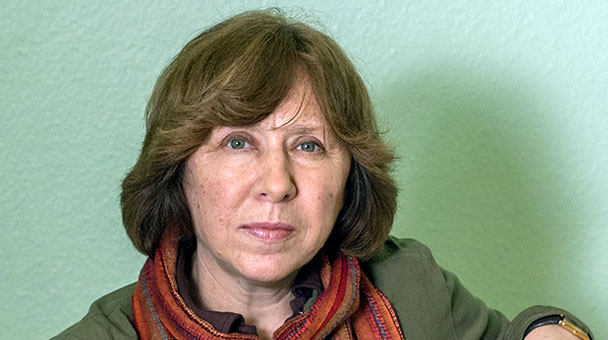 Svetlana Alexievich is a Belarusian investigative journalist and author. She specialises in Soviet and post-Soviet history, crafting non-fiction narratives based on witness testimonies. She writes in Russian.  Announcing Alexievich as the 2015 winner of the Nobel Prize for Literature, the Swedish Academy described her writing as ‘a monument to courage and suffering in our time’.

James Meek is a British journalist and author who has lived in Ukraine and in Russia as a correspondent for the Guardian, becoming its Moscow bureau chief in 1998.  He was named Foreign Correspondent of the Year at the British Press Awards in 2004 and his latest book, Private Island: Why Britain Now Belongs to Someone Else (Verso) won the Orwell Prize in 2015.

This event will be one of Svetlana Alexievich’s few UK public appearances in 2016. She will discuss her new book Second-Hand Time, translated by Bela Shayevich (Fitzcarraldo Editions, May 2016), and the new translation of Chernobyl Prayer (Penguin Classics, April 2016), translated by Anna Gunin and Arch Tait, to mark the 30th anniversary of the 1986 Chernobyl nuclear disaster.

Tickets to the event cost £12 (£6 concessions and English PEN members), and will be available on Friday 18 March at 1pm via the link below: