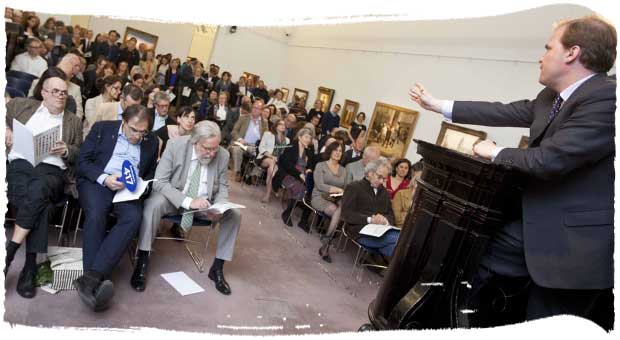 Last night, English PEN was at Sotheby’s for our fundraising auction First Editions, Second Thoughts.  Fifty authors generously annotated a first edition of their most famous book, to be sold on behalf of English PEN.

The headline lot of the evening was a first edition of Harry Potter & The Philosopher’s Stone, personally annotated and illustrated by J.K. Rowling. The sale room fell silent as two determined bidders vied for the prized edition. Bidding leapt in increments of up to £25,000 and the hammer finally fell, to a round of applause, on a £150,000 telephone bid.  You can watch a video of auctioneer Harry Dalmeny making this historic sale on our YouTube channel.  The #PENauction hashtag on Twitter gives some flavour of the high-adrenaline atmosphere in the auction room.

The second-highest price of the auction was achieved for the much-loved children’s classic Matilda by Roald Dahl, with new illustrations by Quentin Blake, which sold for £30,000.

Auction catalogue may be viewed here.