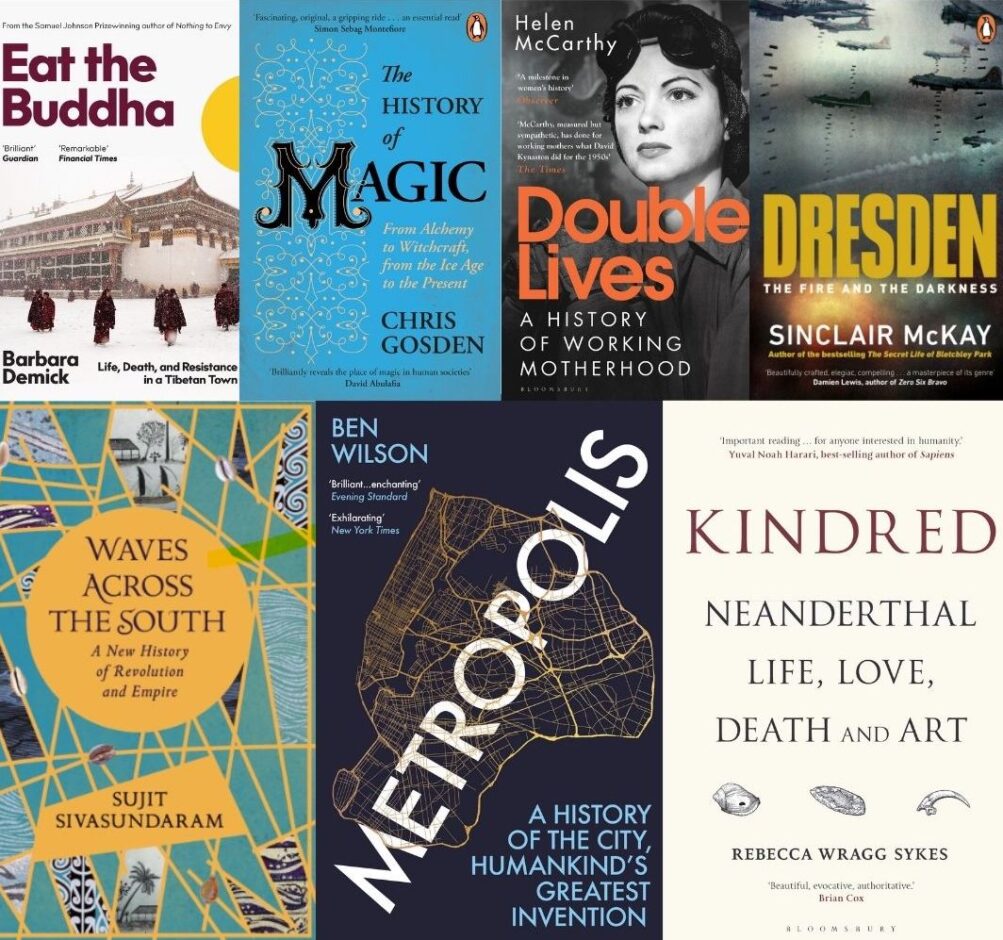 Join us for an online event announcing, and celebrating, the winner of this year’s PEN Hessell-Tiltman Prize. The prize celebrates the best non-fiction on any historical subject. Following the announcement, this year’s winner will join judges Professor Shahidha Bari, Dr Wanda Wyporska and Sameer Rahim in conversation.

‘There is something for everyone in this year’s shortlist for the PEN Hessell-Tiltman Prize. It’s a selection of books that is daring in its range: from exceptionally rigorous histories of magic, war and working mothers, to illuminating new studies of cities, seas and our neanderthal ancestors. The judges were deeply impressed by these ambitious and searching books.’

Eat the Buddha: ‘Eat the Buddha, Barbara Demick’s account of one Tibetan town, unlocks a key geopolitical riddle, instrumental in our understanding of both Tibet and China. However, it is her deft and sensitive location of individual lives within this enthralling history, which captures the reader’s heart and mind. A masterful piece of journalistic and historical writing.’

The History of Magic: From Alchemy to Witchcraft, from the Ice Age to the Present: ‘Chris Gosden achieves the holy grail of bringing together the disparate narratives of magic, science, witchcraft and religion into an intellectual crucible to forge a bold new intellectual history. This magisterial work changes the discourse beyond its own discipline and inspires radical new thinking.’

Double Lives: A History of Working Motherhood: ‘Double Lives is a compelling and comprehensive study of the working lives of mothers over the last 180 years. Helen McCarthy is conscientious in recounting the long history of women’s work and she is compassionate in recognising their struggle. An essential book.’

Dresden: The Fire and the Darkness: ‘The bombing of Dresden killed 25,000 people in one night. Sinclair McKay’s sensitive account tells this terrible story from all sides—the bombers who flew the planes and the civilians caught up in the firestorm. He also asks big questions about the ethics of humanitarian intervention and the possibility of reconciliation between warring factions.’

Waves Across the South: A New History of Revolution and Empire: ‘This is a daring new history of empire that asks us to better understand how the world we live in now came to be. Sujit Sivasundaram tells the story of the sea: the trade and commerce it enabled and the colonial violence it wrought on southern shores. It’s a convincing and illuminating read, full of unheard voices.’

Metropolis: ‘A greatly enjoyable sprawl of a book, roaming from Lagos to London, exploring everything from the infrastructure that made the early cities to the sociability and skyscrapers that define the modern city. Ben Wilson has given us a fascinating read: a book to get lost inside.’

Kindred: Neanderthal Life, Love, Death and Art: ‘Since their discovery in the 19th century, Neanderthals have had a bad press. Kindred brings these extraordinary beings back to life with dazzling skill and narrative verve. Rebecca Wragg Sykes offers a glimpse into a fascinating lost world—while also showing us what we owe to our long-lost cousins.’

This year’s judging panel for the PEN Hessell-Tiltman Prize 2021 is chaired by academic, critic and broadcaster Professor Shahidha Bari. She is joined by author Dr Wanda Wyporska and author and Managing Editor of Prospect, Sameer Rahim.