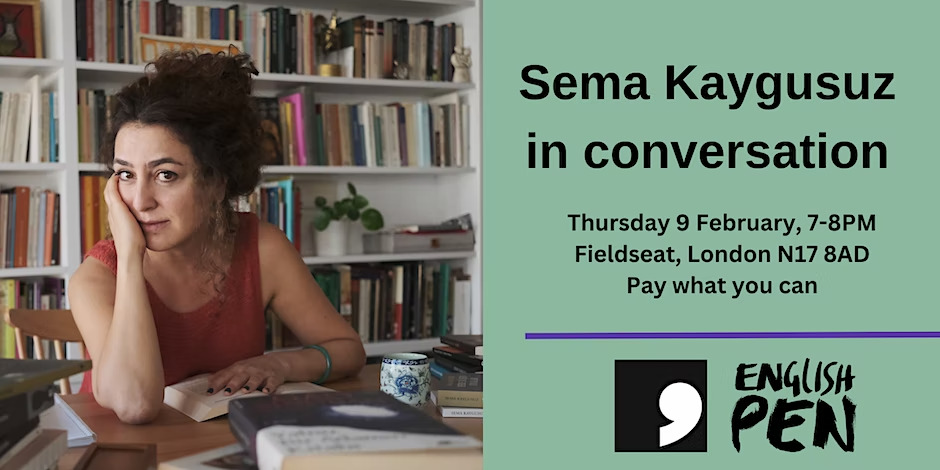 Sema Kaygusuz, a leading writer of contemporary Turkish literature and English PEN writer-in-residence, will discuss her impressive career and writing journey ahead of the publication of Kurdistan + 100 (Comma Press, March 2023), the first anthology of Kurdish science fiction ever collected and published in the UK, to which Sema is a contributor.

Her published works include the novels Yüzünde Bir Yer (Every Fire you Tend), which was inspired by her own grandmother and deals with the feelings of shame and guilt experienced by someone who survives a massacre, and Yere Düşen Dualar (Wine and Gold), and the short story collection Doyma Noktasi (Saturation Point). Her writing touches on the themes of memory and heritage, historical silence, women in society, engaging with the past and imagining the future.

The event will be in English and will end with an opportunity for audience questions and a book sale/signing. Ticket-holders are warmly invited to join us for a drinks reception after the event.

This event is delivered by English PEN in partnership with Comma Press. Ticket holders will also be able to buy a discounted copy Kurdistan + 100 once it is published in March 2023.

Sema Kaygusuz is one of Turkey’s leading female writers. Her debut novel, Yere Düsen Dualar (Wine and Gold) won international recognition upon publication in 2006. In 2007, she wrote the screenplay for Yesim Ustaoglu’s film Pandora’nin Kutusu (Pandora’s Box), which won the Golden Shell at the 2008 International Film Festival in San Sebastian. She is the author of the short story collections Ortadan Yarisindan (In the Middle of the Half), Sandik Lekesi (Box Stain) and Doyma Noktasi (Saturation Point), which established Sema Kaygusuz as a distinctive voice in the canon of young Turkish literature in the new millennium. Her novels The Well of Trapped Words (translated by Maureen Freely and published by Comma Press) and Yüzünde Bir Yer (translated by Nicholas Glastonbury and published in English by Tilted Axis as Every Fire You Tend) were also awarded PEN Translates grants. The latter was inspired by her own grandmother, and deals with the feelings of shame and guilt experienced by someone who survives a massacre. Kaygusuz is a recipient of both the Cevdet-Kudret-Literature Award and the France-Turquie Literary Award. In 2016 she was named laureate of the prestigious German Friedrich Rückert Prize.

Pay what you can