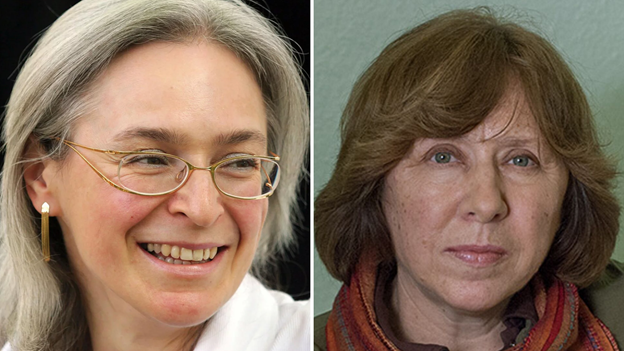 Author, journalist and 2015 Nobel Laureate in Literature Svetlana Alexievich gives the inaugural Anna Politkovskaya Memorial Lecture. The lecture is an international platform to amplify the voices of women journalists and human rights defenders working in war and conflict zones, giving a voice to those who are stigmatised and silenced.

Svetlana Alexievich is an author and journalist whose works have been published in English as The Unwomanly Face of War, Last Witnesses, Boys in Zinc, Chernobyl Prayer and Second-Hand Time (2013). She is outspoken on injustices in the post-Soviet space and giving voice to those trapped in conflict, past and present.

Presented by RAW in WAR (Reach All Women in War) and English PEN, the lecture is named in honour of the Russian campaigning journalist Anna Politkovskaya (1958–2006), known especially for her fearless reporting on the brutal treatment of civilians war in Chechnya, despite numerous acts of intimidation and violence against her. She was murdered in Moscow on 7 October 2006. Despite an ongoing investigation into her murder, those who ordered it have still not been brought to justice 13 years on.

The event is introduced by Anna Politkovskaya’s sister Elena Kudimova and chaired by Mariana Katzarova founder of RAW in WAR.

Svetlana Alexievich is an author, journalist and oral historian who specialises in Soviet and post-Soviet history, crafting non-fiction narratives based on witness testimonies, was born in Ivano-Frankivsk in 1948 and has spent most of her life in the Soviet Union and present-day Belarus, with prolonged periods of exile in Western Europe. Starting out as a journalist, she developed her own, distinctive non-fiction genre which brings together a chorus of voices to describe a specific historical moment. She has won many international awards, including the 2015 Nobel Prize in Literature for ‘her polyphonic writings, a monument to suffering and courage in our time’.Mariana Katzarova founded RAW in WAR in 2006, after working as a journalist and human rights advocate in the war zones of Bosnia, Kosovo and the North Caucasus, including 10 years as the Russia Researcher for Amnesty International. Originally from Bulgaria, she co-founded the first Bulgarian independent newspaper (Democracy) in 1989. Most recently she led the United Nations Human Rights Monitoring Mission in the conflict area in Eastern Ukraine, and was based in Donetsk for two years.

RAW in WAR (Reach All Women in WAR) supports women journalists and human rights defenders working in countries where there is war and conflict and help to end the abuse and persecution against them. To mark the anniversary of Anna Politkovskaya’s murder and to honour Anna, and other women like her in the world, RAW in WAR annually presents the Anna Politkovskaya Award to a woman human rights defender working in a conflict zone in the world, often at great personal risk.

English PEN is the founding centre of a worldwide writers’ association championing freedom of expression and celebrating literature.