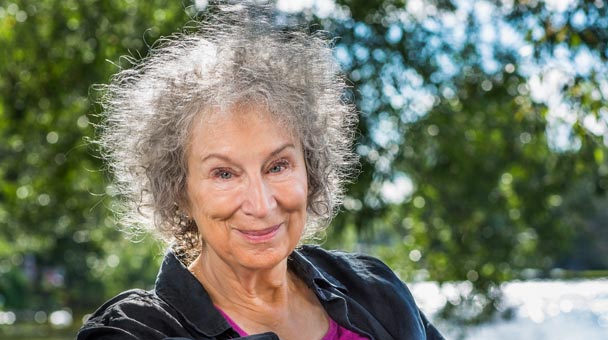 The PEN Pinter Prize 2016 will be awarded to Margaret Atwood on at a public event at the British Library on Thursday 13 October. Atwood  will be presented with the prize at this event and will deliver an address. There will also be a reading from her novel The Handmaid’s Tale by actress Elizabeth McGovern and an encomium by Erica Wagner.  A limited edition booklet containing the presentation will be published by Faber & Faber and available to the audience at the event.

The PEN Pinter Prize was established in 2009 by the worldwide writers’ association and freedom of expression charity English PEN in memory of Nobel-laureate playwright Harold Pinter. The Prize is awarded annually to a writer, in the words of Harold Pinter’s Nobel Literature Prize speech, casts an ‘unflinching, unswerving gaze upon the world’ and shows a ‘fierce intellectual determination…to define the real truth of our lives and our societies.’ This year, for the first time, the prize is open to writers from the Republic of Ireland and the Commonwealth, as well as from the UK. Margaret Atwood was selected by this year’s judges Vicky Featherstone, Peter Stothard, Zia Haider Rahman, Antonia Fraser and President of English PEN and Chair of Judges, Maureen Freely.

The prize will be shared with an International Writer of Courage: a writer who is active in defence of freedom of expression, often at great risk to their own safety and liberty, selected by Margaret Atwood from a shortlist of international cases supported by English PEN. The co-winner will be announced at the event, where they will accept their prize alongside Margaret Atwood.