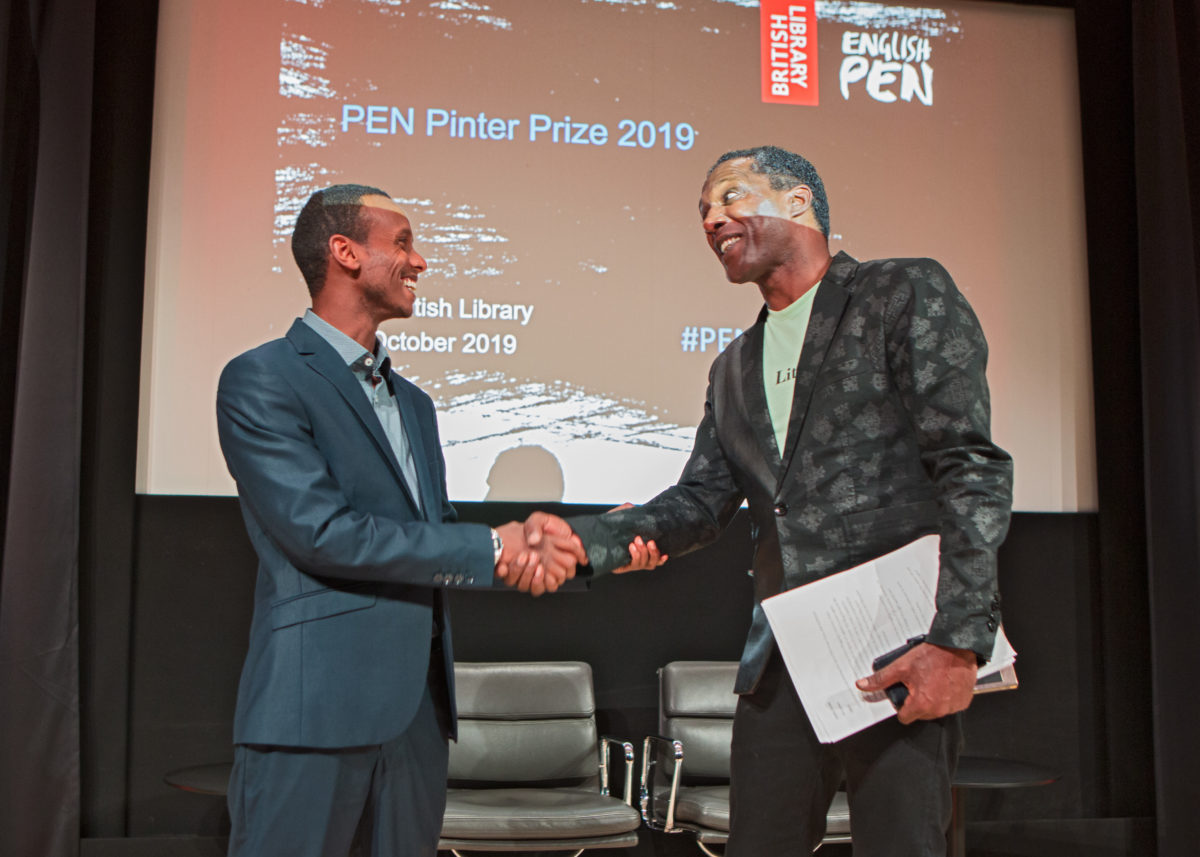 Lemn Sissay, winner of the PEN Pinter Prize 2019, made the announcement at the British Library on Thursday 10 October.

It is because of his passion for writing and belief in freedom of expression for  Ethiopians that I have chosen Befeqadu Hailu.  He is a  novelist and a poet and a blogger. He is a man who stands by his word and whose words stood in the face of prison and arose far far above to declaim in the name of humanity.  When I was considering him I spoke to many Ethiopians in Ethiopia about him. He is loved by his people and the younger generation:  he is a twenty first century hero.  It was obvious that the Writer of Courage had to be him.  He is my hero.

By co-founding the award-winning Zone 9 Blogging Collective, Hailu created a platform for individuals to speak out against human rights violations taking place in Ethiopia. Zone 9’s motto ‘We Blog Because We Care’ underpins Hailu and his co-founder’s aim to create a space for freedom of expression whereby citizens of Ethiopia are supported to help end impunity in the country. As part of this effort they have conducted four major online campaigns which called for the Ethiopian government to respect the constitution.

I think freedom of writing or freedom of speech is an intermediary path between change and violence. Many writers disdain violence. And yet, they write sour truth and encourage audiences to get out of their comfort zone to configure a better world. No war, no force, no campaign has as much power to change the world without claiming lives as writing.

Read the full text of Hailu’s acceptance speech in Amharic and English, translated by Dejeme Tessema.

Hailu has been jailed four times for his blogging and activism engagements, on one occasion for a period of 18 months. However, he has at no point been convicted of charges brought against him.

Despite the risk of future imprisonment, Hailu continues to work tirelessly to bring about change for his country. For his efforts, he – with Zone 9 bloggers – has been awarded Committee to Protect Journalists’s International Press Freedom Award 2015, RSF Award for Citizen Journalists 2015, Hellman/Hammet Human Rights Award 2015 and was a Martin Ennal’s Award finalist for Human Rights Defenders in 2016.

Lemn Sissay was chosen as the recipient of the PEN Pinter Prize 2019 by this year’s judges: writer, translator and chair of English PEN Maureen Freely; culture correspondent at The Economist Fiammetta Rocco and author Niven Govinden. The judges said: “in his every work, Lemn Sissay returns to the underworld he inhabited as an unclaimed child. From his sorrows, he forges beautiful words and a thousand reasons to live and love. On the page and on the stage, online or at the Foundling Museum, this is an Orpheus who never stops singing.”