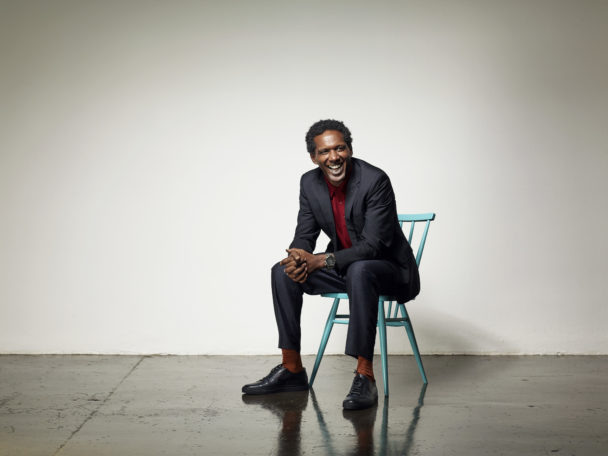 Poet, performer playwright, artist and broadcaster Lemn Sissay has been awarded the PEN Pinter Prize 2019. He will receive the award at a public ceremony at the British Library on the evening of Thursday 10 October, where he will deliver an address.

‘In his every work, Lemn Sissay returns to the underworld he inhabited as an unclaimed child.  From his sorrows, he forges beautiful words and a thousand reasons to live and love. On the page and on the stage, online or at the Foundling Museum, this is an Orpheus who never stops singing.’

‘I met Harold Pinter when I was thirty six. We were on stage at The Royal Court. I was too intimidated or self-conscious to speak to him. And so I will now. Thank you.  What I like about this award is that it is from a great writer and a great organisation. I accept it as a sign that I should continue.All I have is what I leave behind. All I am is what I do.’

The PEN
Pinter Prize was established in 2009 by the charity English PEN, which defends
freedom of expression and celebrates literature, in
memory of Nobel-Laureate playwright Harold Pinter. The prize is awarded
annually to a writer of outstanding literary merit resident in the United
Kingdom, the Republic of Ireland or the Commonwealth who, in the words of
Harold Pinter’s Nobel Prize in Literature speech, casts an ‘unflinching,
unswerving’ gaze upon the world and shows a ‘fierce intellectual determination
… to define the real truth of our lives and our societies’.

‘This is the perfect way to mark the memory of Harold because, like him, the PEN Pinter Prize combines respect for great writing with an unquenchable concern for human rights.’

During the
public ceremony at the British Library, Lemn Sissay will announce his co-winner,
the International Writer of Courage 2019, selected from a shortlist of
international cases supported by English PEN. The recipient will be an
international writer who is active in defence of freedom of expression, often
at great risk to their own safety and liberty. The PEN Pinter Prize 2018 was
awarded to writer Chimamanda Ngozie Adichie, who shared the prize with lawyer
and human rights activist Waleed Abulkhair.

A limited edition booklet of Lemn Sissay’s British Library address will be published by Faber & Faber and available to the audience at the event.

Lemn Sissay is an award winning writer. Lemn is a poet, performer playwright,
artist and broadcaster. He has read on stage throughout the world: from
The Library of Congress in The United States to The University of Addis Ababa,
from the Botanic Gardens of Singapore to literature festivals in Sri Lanka,
from Wembley Football stadium to Maryland Football stadium, from the theatres
of Bangalore to the theatres of Dubai, from a literature festival in Bali to a
stage in Greenland AND Wigan library.  He read poetry at Sir
Paul McCartney’s book launch at The Queens Theatre in The West End.

Lemn’s memoir, My Name is Why, will be published by Canongate
Books on 29 August 2019.