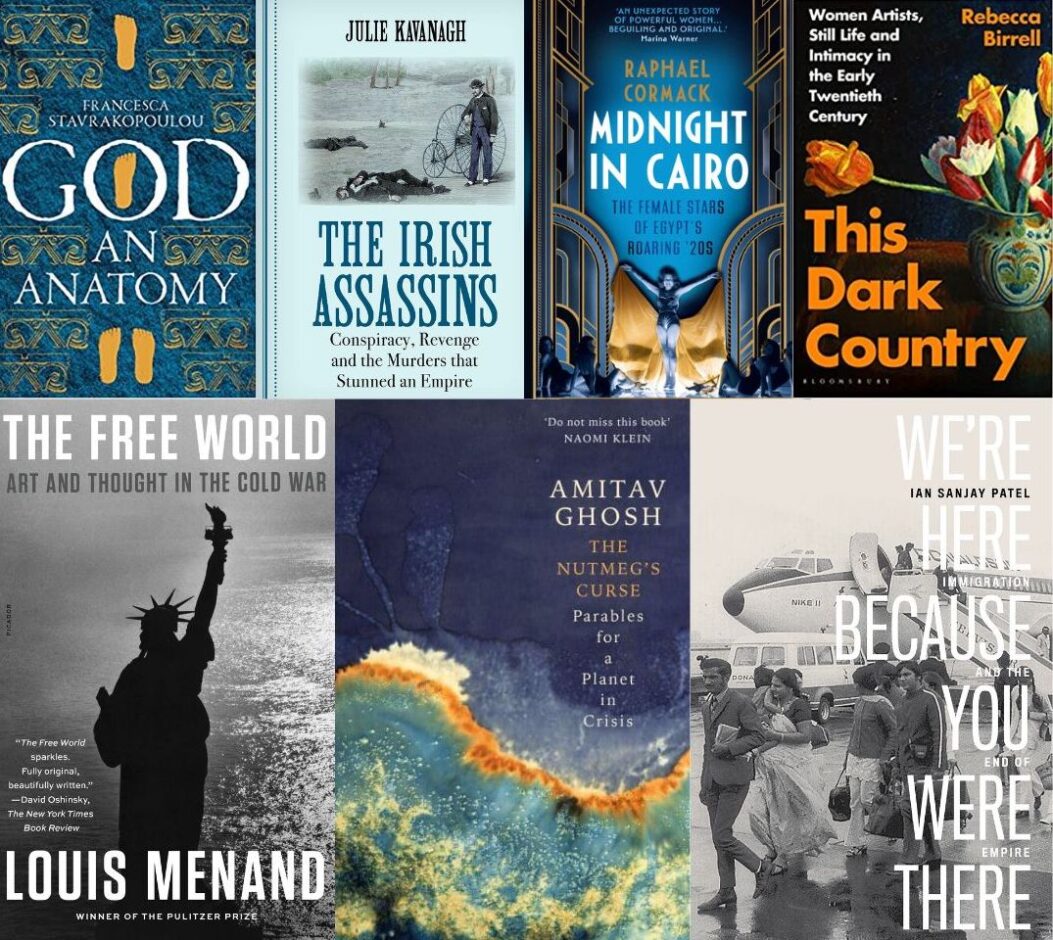 English PEN is pleased to announce the seven shortlisted titles for the PEN Hessell-Tiltman Prize 2022.

Ian Sanjay Patel, We’re Here Because You Were There: Immigration and the End of Empire (Verso Books)

This year’s judging panel for the PEN Hessell-Tiltman Prize 2022 is chaired by Professor Olivette Otele. She is joined by author Dr Emma Southon, and author and editor, Will Rees.

Professor Olivette Otele said: ‘It was a privilege for us judges to immerse ourselves in some of the most compelling pieces of writing published in recent years. Our diverse and powerful shortlist will intrigue passionate readers.’

Zoe Sadler, Events and Prizes Manager at English PEN said: ‘Hearing the judges’ thoughtful, fascinating and nuanced conversation around which books should make the shortlist was a real privilege. The result of that conversation is a thrillingly diverse list, which spans the broadest array of our world’s rich and often troubled history.’

This Dark Country: Women Artists, Still Life and Intimacy in the Early Twentieth Century: ‘In this gorgeously written book, Rebecca Birrell skillfully weaves art history and biography to show how, in their lives and in their still-life paintings, a group of 20th-century women artists radically reimagined their everyday world.’

Midnight in Cairo: The Female Stars of Egypt’s Roaring ’20s: ‘A fascinating, wildly entertaining account of theatre and female entertainers in interwar Cairo, Cormack brings to life a glorious cast of provocative, revolutionary and profoundly exciting women who danced, wrote, acted and changed their world. The result is a unique and electrifying glimpse at a little-known counterculture.’

The Nutmeg’s Curse: ‘The Nutmeg’s Curse is an enthralling story about crumbling worlds. Greed at the core of Western colonialism is central to this tale about land, spice and wealth appropriation, despair and yet indigenous populations’ agency. Amitav Ghosh invites us to understand how the current climate catastrophe is the result of centuries of colonial and post-colonial failures.’

The Irish Assassins: Conspiracy, Revenge and the Murders that Stunned an Empire: ‘A gripping work of historical true crime, which deftly and sensitively handles the unique complexity of Ireland’s place in the British Imperial project and the emergence of the violent Irish Nationalist movement. Unfolding her story like a novel, Kavanagh handles the twin horrors of nineteenth century Ireland under British rule and secret negotiations in Victoria’s parliament with a masterly skill that results in a thrilling and illuminating read full of brilliantly drawn characters.’

The Free World: Art and Thought in the Cold War: ‘In The Free World, Louis Menand has achieved something remarkable, producing not only a highly reliable guide to one of history’s most intellectually febrile of periods, but one that is entertaining and even gripping. Bringing together a vast range of topics, thinkers, and movements, The Free World is above all a feat of synthesis and, despite its not inconsiderable size, of abbreviation.’

We’re Here Because You Were There: ‘How does one move from being a British and Commonwealth citizen to becoming a racialized immigrant in the 21st century? Ian Sanjay Patel’s impressive volume provides some answers and details the ideological push and policies behind an alleged post imperial state. The book’s formidable argument challenges ideas such as a successful transfers of power to former colonized territories and helps unpack current debates about post-world war laws and attitudes.’

God: An Anatomy: ‘Challenging the common vision of the Abrahamic God as an incorporeal figure in the sky, Stavrakopoulou’s forensic and vivid examination of Yahweh’s origins reveals a ruddy-cheeked, curly-haired and extremely masculine deity. Exploring God from head to toe, God: An Anatomy is revelatory and brilliant examination of the emergence of monotheism written with real verve and vitality.’

The winner of the 2022 PEN Hessell-Tiltman Prize will be announced at a special event on 8 December.