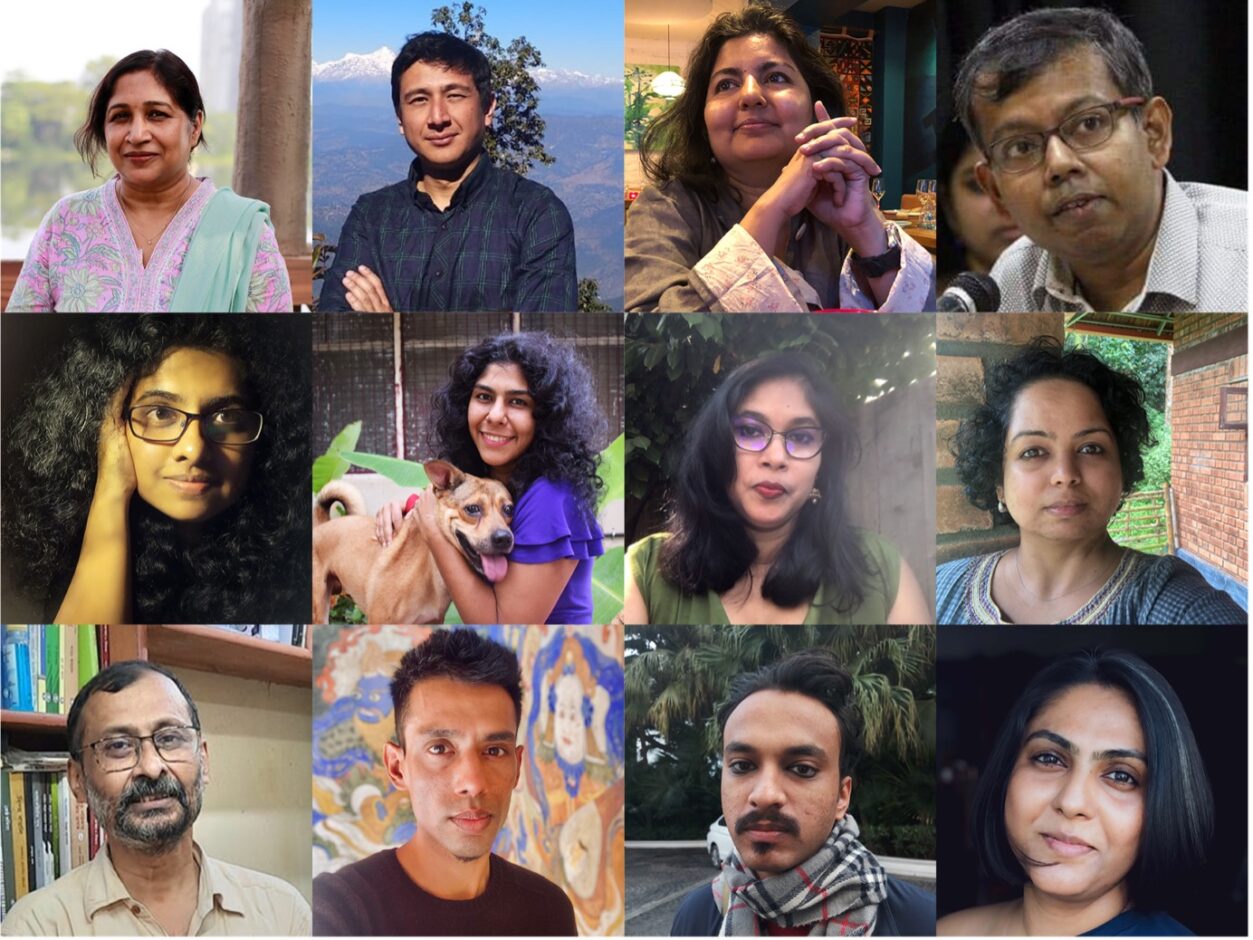 – 12 translators representing seven of the languages of India have been shortlisted for the first round of PEN Presents, English PEN’s new award for sample translations.

The 12 shortlisted translators of Indian literature have been awarded grants to create 5,000-word samples, as part of PEN Present’s aim of funding the often-unpaid work of sample translation. They are:

The shortlist represents seven of the languages of India, and includes novels, short stories and memoir. Six samples will be chosen from the shortlist by the PEN Presents Selection Panel – seven experts from across the UK and Indian literary sectors – to be showcased in an issue on the PEN Presents platform, an online catalogue of the most outstanding, original, and bibliodiverse literature not yet published in English translation. They will be given editorial support from English PEN and promoted to UK publishers.

Selected from an extraordinarily large and strong set of proposals, this shortlist represents a remarkable breadth of outstanding Indian literature not yet published in English translation. We are delighted that these 12 translators, authors and works cover such a range of languages, geographies and themes, and I am particularly thrilled by the number and quality of works by Dalit writers represented. This shortlist is a testament to the vitality of Indian literature in Indian languages, the urgent possibility of fostering their translation into English, and the talented community of literary translators who are poised to do so.

PEN Presents was launched following a 2021 research collaboration between English PEN and the Translating Women project, which consulted with translators, agents, publishers and literature organisations, and found a widespread desire for an initiative supporting and showcasing sample translations. The programme aims to fund literary translators’ work of creating samples, give publishers better access to titles from underrepresented languages and regions, and help diversify the translated literature landscape.

From epic to memoir, novels to short stories, the quality of these shortlisted pitches testifies to the range and ambition of extraordinary writers and translators working across India and the diaspora today. We look forward to reading the samples, and to championing these works as they make their way to publishers and ultimately into readers’ hands.

The first round of PEN Presents is a partnership between English PEN and the British Council, as part of the British Council’s India/UK Together Season which will see a vast programme of creative collaboration, education and cultural exchange including key projects focusing on building stronger connections between India and the UK’s literary and publishing sectors.

The British Council is delighted to partner with English PEN on this edition of PEN Presents to strengthen connections with Indian-language publishing as part of our India/UK Together Season of Culture. I am really pleased to see the large proportion of submissions by literary translators living and working in India and the breadth of languages represented in the shortlist. I hope that this will be a great opportunity for us to hear from those whose work is currently underrepresented in English-language publishing, and that we will see a growth in literature in translation from India in the longer term.

Winners of the first round of PEN Presents will be announced at the end of October 2022. The programme will open for proposals of works in any language and from any region in January 2023.

Anurag Basnet is an editor, translator and academic based in Gangtok, Sikkim. He has over fourteen years of experience in the publishing industry, with stints in Penguin Books India (now Penguin Random House India) and Rupa Publications. His last role was as Managing Editor at Speaking Tiger, an independent publishing house in New Delhi. He currently teaches at SRM University in Gangtok. His published works include Is That Even a Country, Sir!, a translation of the travelogue Woh Bhi Koi Des Hai, Maharaj! by Anil Yadav; and The Free Voice: On Democracy, Culture and the Nation, a co-translated collection of essays  by journalist Ravish Kumar

Deepa Bhasthi is a writer and translator living and working in Kodagu, South India. Her translation of Jnanpitha Awardee Dr Kota Shivarama Karanth’s novel The Same Village, The Same Tree was published in August 2022. A translation of short stories by Kodagina Gouramma, among the earliest women writers in Kannada in the early twentieth century, is forthcoming from Yoda Press. Deepa writes on visual art, literature and politics of culture for publications including ArtReview, MOMUS, Literary Hub, Himal Southasian and Hyperallergic. Her research interests are in the areas of sociolinguistics, land versus landscape and food politics. She occasionally works in visual art projects

Sayantan Dasgupta teaches Comparative Literature at Jadavpur University, Kolkata. He translates mostly from Bangla to English. He has edited a number of anthologies of Bangla and Nepali short stories in English translation and has published an English translation of Girishchandra Ghosh’s Bangla play, Jaisa ka Taisa, which is itself an adaptation of Molière’s French play, L’amour médecin. As Coordinator of the Centre for Translation of Indian Literatures, he tries to promote student involvement in translation by organising collaborative translation workshops in different colleges and universities. His most recent endeavour is Dalit Lekhika: Women’s Writing from Bengal, a co-edited anthology of Dalit writing by women from Bangla in English translation. He is also member of the Advisory Board (English) of the Sahitya Akademi, India’s national body of letters, and a member of the Executive Council of the International Comparative Literature Association.

Fathima E.V, a writer- translator from Kerala, India, translates from Malayalam. She is the co-recipient of the JCB Prize for Literature 2021, awarded to Delhi: A Soliloquy, a novel by M. Mukundan that she co-translated with Nandakumar K. Fathima has also received the Crossword Prize for English Translation of Fiction from Indian Languages 2017 and V. Abdulla Translation Award 2017, for her debut translation, A Preface to Man (by Subash Chandran). Her other translations include Baby Doll: Stories of Gracy, and translations of Malayalam poetry. Her own poems and short fiction have appeared in international anthologies and journals. An Associate Professor of English, she currently works as a visiting faculty for Translation Studies at TE Malayalam University, Kerala.

Gopika Jadeja is a bilingual poet and translator, writing in English and Gujarati. Her literary writing and translations have been published widely. Gopika is committed to translating writing from marginalised communities and is working on a project of English translations of Dalit and Adivasi poetry from western India. She is Editor at Large for Wasafiri: International Contemporary Writing and Editor for PR&TA: Practice Research and Tangential Activities. She currently lives and works in Singapore.

Kartikeya Jain is a 2022 South Asia Speaks fellow and an independent writer, editor and translator (English and Hindi) from Delhi, India. Kartikeya’s work appears in Scroll.in, the Deccan Herald, Out of Print, the Kodai Chronicle, Thelallantop.com and Nether Quarterly. They live in Kodaikanal and work part-time as Managing Editor at The Kodai Chronicle.

Maithreyi Karnoor is the recipient of the Charles Wallace India Trust Fellowship for creative writing and translation at Literature Across Frontiers, University of Wales Trinity Saint David. She has won the Kuvempu Bhasha Bharati prize and has been shortlisted for the Lucien Stryk Asian Translation Prize for A Handful of Sesame. She is a two-time finalist of the Montreal International Poetry Prize. Sylvia: Distant Avuncular Ends is her debut novel. The novel Tejo Tungabhadra is her most recent work of translation.

Nandini Krishnan is the author of Hitched: The Modern Woman and Arranged Marriage (Random House, 2013) and Invisible Men: Inside India’s Transmasculine Networks (Penguin Random House, 2018). She is also the translator of Estuary (Westland Books, 2020) and Four Strokes of Luck (Juggernaut, 2021) by the Tamil writer Perumal Murugan. An extract from her novel-in-progress was one of the five winners of the Caravan and Writers of India Festival contest at the Festival des Écrivains du Monde, 2014. She is also a playwright and alumna of the Writers’ Bloc workshop conducted by the Royal Court Theatre, London. Nandini lives in Madras, with ten dogs, eighteen cats, a few thousand books, and a varying number of human beings.

Shabnam Nadiya is a Bangladeshi writer and translator, settled in California. A graduate of the Iowa Writers’ Workshop, she is the recipient of the Steinbeck Fellowship (2019) for her novel-in-progress Unwanted; the PEN/Heim Translation Grant (2020) for her translation of Mashiul Alam’s short fiction The Meat Market and Other Stories; and the 2019 Himal South Asian Short Story Prize for her translation of Mashiul Alam’s short story ‘Milk’. Nadiya’s translations include Shaheen Akhtar’s novel Beloved Rongomala (Eka/Westland, forthcoming in September 2022), Leesa Gazi’s debut novel Hellfire (Eka/Westland, September, 2020), and Moinul Ahsan Saber’s novel The Mercenary (Seagull Books, 2018). Her original work as well as her translations have been published in: SAAG Anthology, Harpur Palate, The Offing, Joyland, Amazon’s Day One, Gulf Coast, Copper Nickel, Wasafiri, Words Without Borders, Asymptote, Al Jazeera Online, Flash Fiction International (WW Norton).

Nikhil Pandhi is an Ambedkarite queer-feminist researcher and anti-caste translator from India. He is currently completing a PhD in cultural anthropology at Princeton University. He is broadly interested in the radical world-making possibilities and pluriversal capacities of anti-colonial and anti-Brahmanical modes of storytelling. His anthropological and translational research cross-pollinates Dalit studies, Black studies, Queer-feminist studies and their intersections with critical studies of caste, race and ethnicity across South Asia and the Global South. He is currently editing and translating Love in the Time of Caste, a collection of selected contemporary Dalit-feminist love stories, forthcoming from Zubaan. Some of his translations of Dalit-feminist poems can be found on Scroll.in and The Wire. He is also working on a book of poems inspired from his everyday auto-ethnographic thresholds.

V. Ramaswamy took up literary translation from Bangla, of voices from the margins, after two decades of grassroots and public activism in support of the labouring poor in his city, Calcutta. He has translated Subimal Misra’s The Golden Gandhi Statue from America: Early Stories, Wild Animals Prohibited: Stories, Anti-Stories, and This Could Have Become Ramayan Chamar’s Tale: Two Anti-Novels, and Manoranjan Byapari’s novel The Runaway Boy. His translation of Adhir Biswas’s Memories of Arrival: A Voice from the Margins, was published in 2022, as were Shahidul Zahir’sLife and Political Reality: Two Novellas (co-translated with Shahroza Nahrin), and Why There Are No Noyontara Flowers in Agargaon Colony: Stories. He has attended residencies at Sangam House, India, Writers Omi, USA, and at the Toji Cultural Foundation, Korea. He was selected for the inaugural Literature Across Frontiers – Charles Wallace India Trust fellowship in creative writing & translation at Aberystwyth University, Wales, in 2016. Ramaswamy was recently selected for the inaugural translation fellowship of the New India Foundation.