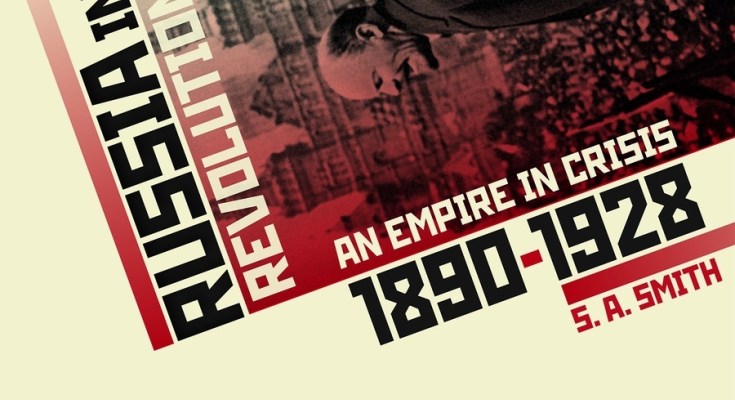 English PEN is pleased to announce that S.A. Smith has won the PEN Hessell-Tiltman Prize 2018 for his ‘mesmerising’ Russia in Revolution: An Empire in Crisis, 1890 – 1928 (OUP).

The book is a panoramic account of the Russian Revolution and how it transformed the face of the Russian empire, politically, economically, socially, and culturally, and also profoundly affected the course of world history for the rest of the twentieth century.

The announcement was made on Saturday 23 June at the Wimpole History Festival at the Wimpole Estate in Cambridgeshire, a collaboration between the National Trust and the Cambridge Literary Festival. Smith was short-listed alongside Stephen Alford, Anne Applebaum, Masha Gessen, Christopher J. Lebron, and Lynda Nead.

Stephen Smith’s Russia in Revolution: An Empire in Crisis, 1890-1928 is the book for the centenary of the Russian Revolution. It is “total history” at its best: expansive, paying attention to the individual as well as institutional and state actors, even-handed yet reflective on his own position. Crucially, Smith is passionate about delineating the role of human agency. Smith is a consummate chronicler of complex events. The book is mesmerising.

The Soviet Union collapsed more than a quarter of a century ago, yet opinion about the Revolution that gave birth to that regime continues to be divided.  In the centenary year public commentators variously saw the Revolution as ushering in the totalitarianism of the inter-war period, or as opening up the possibility of a new, more just and equal society. In my book I tried to be as dispassionate as possible, highlighting the idealism and radical ambition of the October Revolution, yet tracing how the authoritarian and violent practices of the Bolsheviks paved the way for Stalinism. However, I tried to write a history of the Revolution that did not put the Bolsheviks centre stage, but rather showed how economic modernization from the late nineteenth century, combined with the destructiveness of war, unleashed social, political and cultural changes that undermined the Romanov empire and shaped the course of the Bolshevik regime in the years up to 1928, when Stalin unleashed forced collectivization of the peasantry and crash industrialization. It is a great honour to win a prize that has been awarded to so many historians I admire.

PEN Hessell-Tiltman Prize of £2,000 is awarded annually for a non-fiction book of specifically historical content. Entrants are to be books of high literary merit – that is, not primarily written for the academic market – and can cover all historical periods. Marjorie Hessell-Tiltman was a member of PEN during the 1960s and 1970s. On her death in 1999 she bequeathed £100,000 to the PEN Literary Foundation to found a prize in her name.

Wimpole History Festival is a weekend of history and heritage for the whole family. Taking place for the second time this year, Wimpole History Festival is the product of a unique partnership between Cambridge Literary Festival and the National Trust. Set in the beautiful Wimpole Estate with its country mansion, rolling parkland and library of more than 10,000 books, this is the perfect backdrop to welcome some of Britain’s best and most engaging historians.

The festival’s feast of history and heritage for the whole family includes talks, debates, book signings and performances, as well as rich, interactive living history through the ages, historical walking tours, workshops, activities and events for young history-lovers.