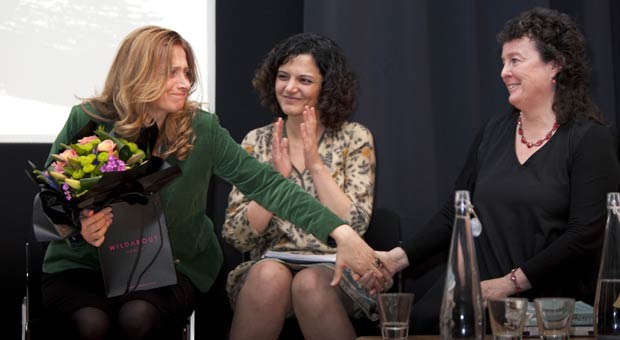 Syrian journalist and author Samar Yazbek has been chosen as the PEN Pinter International Writer of Courage.  She shares the prize with this year’s British winner Poet Laureate Carol Ann Duffy.

Samar Yazbek was chosen in recognition of her book A Woman in the Crossfire, published by Haus, an account of the revolution from inside Syria and her vocal opposition to the Assad regime. The book won a PEN award for translation earlier this year.

Carol Ann Duffy made the announcement at a public event at the British Library on Monday 8 October at which she herself received the 2012 PEN Pinter Prize from Lady Antonia Fraser and performed a selection of her poems.

Carol Ann Duffy said: ‘I have chosen Samar because of her literary skill … and her bravery in writing about her opposition to the bloody Assad regime when she is already such a prominent figure in Syria and so at increased risk.  Harrassment from the security services and denouncements from her family and clan have forced her to flee Syria to Europe.’

In her acceptance speech, Samar Yazbek said: ‘This honour is dedicated to the martyrs of the Syrian revolution, and to all those women who are working in silence, in particularly difficult circumstances inside Syria, and to those who move among the downpour of bullets and artillery fire, the tanks and the fighter jets, in order to carry on the revolution of the Syrian people toward establishing a free and democratic society.’

Lady Antonia Fraser, Harold Pinter’s widow, commented: ‘Carol Ann Duffy’s recognition of Samar Yazbek’s courage in writing about Syria’s revolution from the inside could not come at a more appropriate time.’

You can read Samar Yazbek’s PEN Atlas dispatch here in which she describes the dangerous, often fatal struggle of capturing the truth of the Syrian revolution