The tyranny of space: interviews with Ahmet Altan and Ahmet Turan Alkan 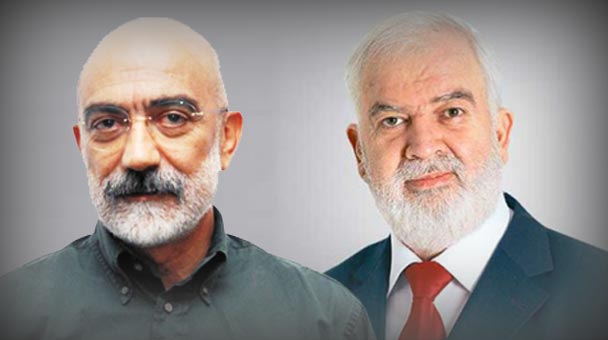 Ahmet Altan and Ahmet Turan Alkan are among more than 180 journalists and writers currently in prison in Turkey, according to the latest figures from the freedom of expression group P24.

Ahmet Altan, one of Turkey’s best-selling authors, is serving a life sentence, along with his brother the economist Mehmet Altan, that has been widely condemned as based on bogus charges. He is currently appealing his sentence. Ahmet Altan has written a book of essays in prison due to be published in Germany, Spain and Norway this autumn, with English editions also planned. The first essay Altan wrote in prison was published by English PEN, in partnership with the Society of Authors.

Ahmet Turan Alkan has been in pre-trial detention for almost two years, facing charges that include attempting to overthrow the constitutional order. He was a columnist with Zaman, a publication that has been closed down and was affiliated with the Gülen movement. The charges against both are considered to be politically motivated, as part of an ongoing crackdown against freedom of expression in Turkey.  He has written three books in prison, including a novel about right-wing politics in Turkey.

Jo Glanville interviewed them both for the Guardian, by sending written questions to them in prison. The interviews are published in full below.

Can you describe the circumstances in which you’re writing? Where and when do you write? How difficult is it to do in a cell with two other men?

We have a white plastic square table that is one metre on each side. When we don’t pace the courtyard we sit at this table. Most of our lives is spent in the plastic chairs around this table. I write on this table, using a ballpoint pen. I start writing once the words have been shaped in my mind; sometimes I write for eight, nine hours. I have to take a break at meal times. While I write my cellmates usually watch TV. Of course every writer wants to write in a peaceful and quiet place. This is not a luxury I have at this moment. But once I start writing my connection to what goes on around me is gradually broken. I don’t hear the sounds. I don’t notice the movements. I dive into my writing, I forget where I am. Of course, the dining table in a cell is not the most convenient place to write, but in my case, complaining about the conditions is not meaningful.

What is most important to you in the act of writing in prison? Has it affected the kind of subjects you are writing about or even the way you write?

This is how my father described happiness in an essay: ‘Happiness is to forget time.’ And in another essay, he described the prison as such: ‘The prison constantly reminds one of time.’ I forget about time when I write. I also forget about space.

Time with its unstoppable movement that defies human will is the greatest tyrant in our lives. You know that it erases the contours of your existence, that it drags you into nothingness and that some day your image will disappear altogether. This fact becomes ever so palpable in the prison. My only weapon against this tyranny is writing. As I write I not only forget the tyranny of time but also feel satisfied with the sense that I am doing something that time cannot erase. Time can erase the writer, but it cannot erase the written word. Even if it erases what I write, it won’t be able to erase what someone else has been writing. To feel that I am part of a great power that resists tyranny gives me strength in this small cell.

I am able to resist both tyrannies by writing.

The prison determined the subject of my latest book. It is a collection of essays. It will come out in the autumn and is about what I have been through in police custody and in prison.

Your writing is reaching an international audience, perhaps before it reaches Turkey. Where is it most important for you to be heard?

For the first time in my life, a book I have written will be published in other languages before it is published in Turkish. This is a new situation for me.

A writer’s adventure with writing oscillates like a pendulum between two words. While writing you don’t think of ‘anyone,’ once you’re done writing you want ‘everyone’ to read what you wrote. I, too, want everyone to read what I wrote, I want the whole world to hear my voice. Of course, I want my own country to hear my voice, too, but it looks like this won’t be possible for a while.

When speaking out is a dangerous business in Turkey and there is little space for independent journalism, how do you think writers and journalists (inside and outside prison) can best respond?

What is the subject of the novel you are writing?

I would like to write about a happy woman. In literature, happiness never has the excitement and attractiveness of unhappiness. That is why happy protagonists are almost non-existent compared to unhappy ones. Can a happy woman sustain her happiness, how long can she remain happy? Can the story of a happy person be told in an attractive and exciting way? I would like to try to find the answers to these questions.

I understand that you have written a novel in prison. What is the subject?

Yes, I wrote a novel while in prison. It’s called Sağ Yanım (My Right Side). In a nutshell, it is an encounter between me and Turkey’s right-wing politics through imaginary characters. It is a confrontation with the constituents of ‘the right wing’: nationalism, conservatism in its old and new forms, politicised Islam (or Islamism), right-wing delusions, myths, or to put it more precisely, with the [right wing’s] perception and knowledge of history. Had I not been in prison this confrontation would have been more documental, perhaps in the style of an essay, but the trouble I faced in getting my hands on books and other source material pushed me towards the more permissive and impassioned realm of the novel.

How far is the novel shaped by your recent experiences?

I would say almost completely. We could speak of a major literary tradition in Turkey that exclusively delves into the right wing, but this, I mean, my book, looks at the matter at hand ‘from the inside’. I tried to face up to everything that I had been through, more importantly — and sadly — everything that I once believed in, and fought for, for many years. My novel became the product of some sort of catharsis, a thought treatment, if you will. Inevitably, some of what I had been through got reflected in my novel — just like every novelist experiences one way or another. But this surely did not amount to an autobiography.

Why did you decide to write a novel rather than non-fiction?

For many years, I wrote essays — and several thousand newspaper columns in the meantime. I have always felt some longing towards other literary styles, particularly the novel. When I was ‘outside’, despite my desire of writing a novel, I never managed to come up with one, but behind bars, I had no other option but write a novel because of the reasons I mentioned. Of course, calling what I wrote a ‘novel’ is a highly subjective claim, for up until now, no one has read my text from

start to end, and it is still in the form of a manuscript. Therefore I cannot be too assertive about the literary aspect of my book, but at least I can say that each of the smaller stories that make up the larger story is true and honest.

How far have your experiences affected the subject of your writing and your approach as a writer?

The prison is not an ideal place in which to write, for returning to pen and paper for someone who has gotten used to writing on a keyboard ever since the Macintosh Plus came out poses enormous pains in arranging the flow of one’s ideas. Furthermore, I paid extreme attention to not include anything from my experience behind bars in this book. I never really liked prison literature anyway, and I have no intentions of being a part of it. I would like to invite my potential readers to try and be aware of the beautiful things in life through my writing, not mentally place them inside a prison. The other two books I also wrote while in prison are exactly in that manner: the first one is a weird autobiography in which I make fun of my passion for hobbies — an ‘autohobbyographie’, if you will — and the second one is my attempt at writing a romance novel called “Küçük Abla” (Little Sister), which slightly delves into Turkey’s Armenian issue in its backdrop.

Do you have a publisher for the novel?

No, I do not have a publisher yet. For some reason, my old publisher, which published and distributed all my previous books, has not even once contacted me in two years! It’s not a big deal though. What mattered [during my time in prison] was being able to write and this way prevent my ‘internal bleeding’, and I believe I’ve managed to do that.

With thanks to Yasemin Çongar for her generous assistance and to the Guardian for permission to publish the interviews in full. The Guardian article ‘Inside stories: Turkey’s grim tradition of publishing behind bars‘ may be read on the Guardian website.