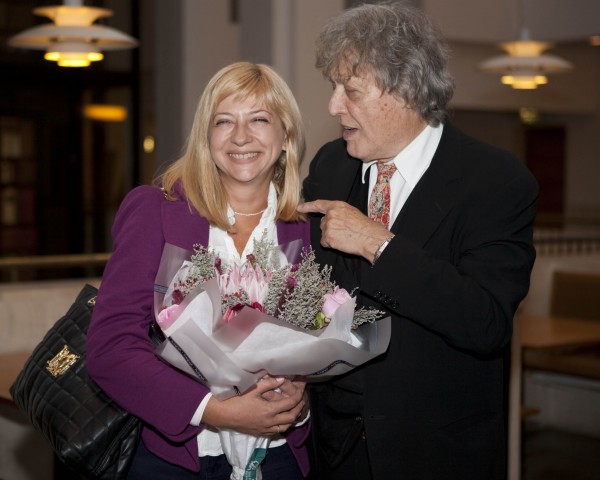 Belarusian journalist Iryna Khalip has been chosen as the International Writer of Courage who will share the PEN / Pinter Prize 2013 with British playwright Tom Stoppard. Iryna Khalip was chosen in recognition of her vocal criticism of the government in Belarus in spite of intimidation and imprisonment.

Tom Stoppard made the announcement at a public event at the British Library this evening, Monday 7 October, when he formally accepted the PEN / Pinter Prize 2013, awarded to him by judges Christopher Bland, Carol Ann Duffy (last year’s winner), Antonia Fraser, David Lan and President of English PEN and Chair of Judges, Gillian Slovo.

Tom Stoppard delivered an address written for the occasion, which was published in a limited edition by Faber & Faber and presented to members of the audience. He was introduced by director Trevor Nunn and there were dramatic readings from his plays Every Good Boy Deserves Favour and Voyage, the first play in Tom’s trilogy Coast of Utopia, which address the subject of dissent and repression in nineteenth- and twentieth-century Russia.

Tom Stoppard was named as recipient of the prize in July this year. From a shortlist provided by the English PEN Writers at Risk Committee he chose Iryna Khalip to share the prize with him. He knows Iryna through his own involvement and support for the campaign for Belarus. The award recognises a writer who has been intimidated for speaking out about their beliefs.

Harold would have greeted Tom’s win with enthusiasm as a great admirer of his work; he would have been particularly pleased by the award to Iryna, since the Belarussian cause was close to his heart.

I started off as a journalist and I’m proud to share the prize with a brave reporter.

It’s a real honour for me, but more than this, it’s a recognition of the just fight of the people of Belarus for human rights and for our dignity.